A 21-year-old male with a reported history of essential hypertension since the age of 16 presented with a four-day history of abdominal pain, nausea and vomiting. He was noted to have systolic blood pressures exceeding 200 mmHg with an otherwise unremarkable exam. Initial review of systems was negative except for micturition causing severe hypertension, headache, palpitations and diaphoresis. Family history was notable for hypertension in multiple family members. Initial evaluation included a CT scan of the abdomen/pelvis which revealed a 5 cm mass involving the prostate and bladder, enlarged paracaval lymph nodes, and right-sided hydronephrosis. Workup for secondary causes of hypertension demonstrated normal renin/aldosterone and markedly elevated 24-hour urinary vanillylmandelic acid (VMA), urine normetanephrines and fractionated urine catecholamines. Pelvic lymph node biopsy demonstrated metastatic paraganglioma. After the diagnosis was obtained, the family recalled that a paternal uncle was also diagnosed with a paraganglioma (see Figure 1). Genetic testing identified a SDHB gene mutation, confirming hereditary paraganglioma syndrome (HPGL).

Hypertension in children is relatively uncommon, with a prevalence ranging from 0.8% to 4.5%. Up to 51% of teenagers with hypertension have an identifiable secondary cause. Only 6% of secondary hypertension diagnoses are related to endocrine disease.

Paraganglioma is a rare neuroendocrine tumor arising from chromaffin cells at extra-adrenal sites along the autonomic nervous system (known as pheochromocytoma when arising from the adrenal medulla). While usually benign, 10-15% are malignant. A majority of paragangliomas secrete catecholamines, often causing symptoms such as headaches, flushing, diaphoresis, syncope, arrhythmias and hypertension. The best screening test is measurement of plasma free and urinary fractionated metanephrines due to sensitivities of 99 and 97% respectively, compared with 86% and 84% for plasma and urinary catecholamines. Treatment with an a-1 adrenergic antagonist often reduces these symptoms. Definitive management typically involves surgical resection for benign disease or surgery with adjunctive radionuclide therapy/chemotherapy for malignant disease.

HPGL is an autosomal dominant inherited disorder that increases the risk of recurrent paragangliomas and pheochromocytomas and is associated with a family of genetic mutations in the SDHx gene family. The SDHB variant, in particular, is associated with metastatic disease and intraabdominal involvement. 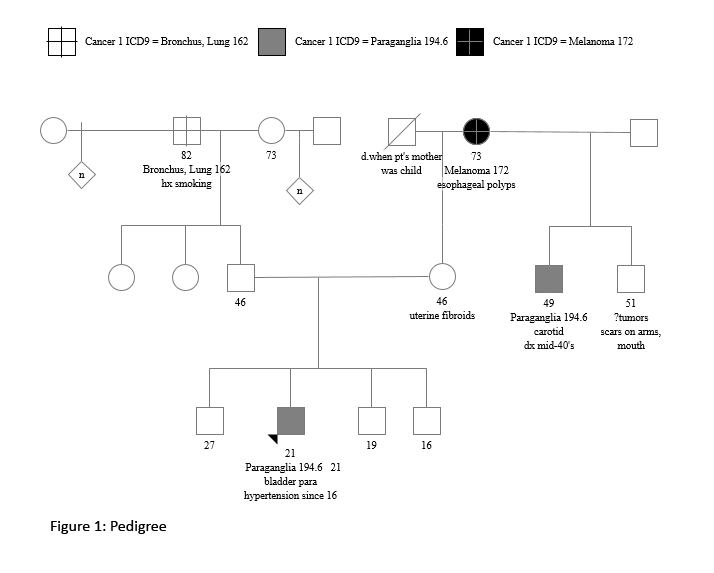