Case Presentation: A 52-year-old woman presented with the subacute onset of exertional dyspnea and non-productive cough.  The patient admitted to smoking 10 cigarettes daily, and described the regular use of inhaled (smoked) methamphetamine. Physical exam was remarkable for rales that were most prominent in the right upper lobe and left lower lobe distributions. Room air oxygen saturation was 90% at rest by pulse oximetry. CAT of the chest disclosed diffuse bullous and fibrotic change (Figure 1).  Urine toxicology screen was positive for amphetamine (cut-off level 1000 ng/mL).  Alpha-1 anti-trypsin level was within normal range.

Discussion: Methamphetamine is recognized as the most common illegal stimulant in the United States today, where its use has reached epidemic proportions. A myriad of negative health affects have been reported, but direct pulmonary toxicity has rarely been described in the literature.  A single animal study demonstrated bronchoalveolar lavage fluid evidence of acute lung injury, a precursor to fibrosis, in mice exposed to inhaled methamphetamine1.  A single case report described progressive pulmonary fibrosis in a chronic user of methamphetamine secondary to associated talc inhalation, which is often used as a “filler” material when methamphetamine is “cut”, or mixed2.

Conclusions: Pulmonary fibrosis is a rare complication of inhaled methamphetamine use.  As the methamphetamine epidemic continues, this will likely become a more common etiology of interstitial lung disease.  A detailed exposure history, which may be difficult to obtain because of the associated social stigma, is of paramount importance in identifying this risk factor. 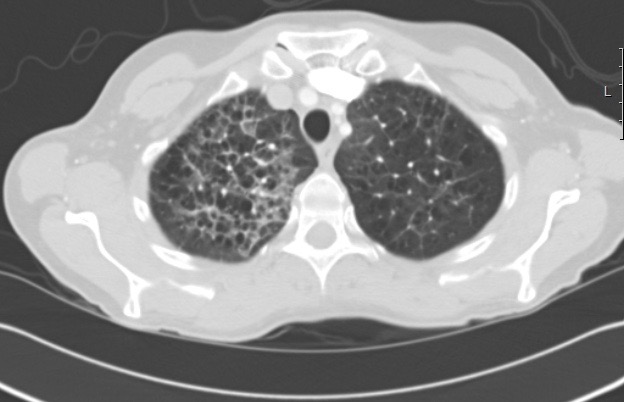