A 55‐year‐old male with a history of ulcerative colitis (UC) presented with left‐sided abdominal pain associated with nausea and vomiting. He denied associated diarrhea, hematochezia, melena, fevers or chills. His UC was well controlled on a regimen of mesalamine, azathioprine, and infliximab infusion every 8 weeks. On presentation, vital signs were stable, but exam was remarkable for tenderness in the left upper and lower quadrants with hypoactive bowel sounds. Labs revealed WBC of 5.5 k/mm3 with 82% neutrophils, hemoglobin of 11.6 g/dL, normal electrolytes, an elevated erythrocyte sedimentation rate of 82 mm/h and C‐reactive protein of 8.8 mg/dL. Suspecting a UC flare, the patient was started on IV solumedrol. Despite steroid therapy, his pain did not improve significantly. Subsequent colonoscopy showed mild erythema and granularity of rectosigmoid colon, changes consistent with ulcerative colitis. CT enterography was then performed, discovering thickening of the rectosigmoid colon with pronounced retroperitoneal lymphadenopalhy. Since retroperitoneal lymphadenopathy in the absence of mesenteric lymphadenopathy is atypical for ulcerative colitis flare, The patient underwent CT‐guided biopsy of a retroperitoneal lymph node with pathology confirming Hodgkin's lymphoma. Because of the risk of lymphoproliferative disorders (LD) associated with azathioprine and infliximab, both of these medications were discontinued. 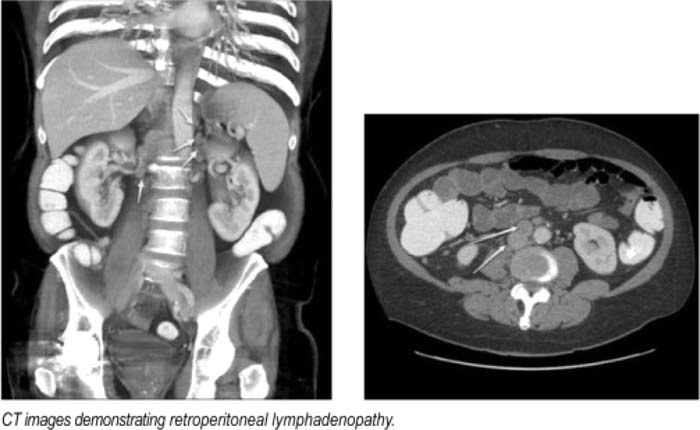 With increasing use of immunosuppressants (e.g., azathioprine) and tumor necrosis factor‐α blockers (TNF blockers), for example, infliximab, in inflammatory bowel disease (IBD), a growing body of evidence suggests an increased risk of lymphoma associated with these agents. Although population‐based studies suggest that IBD itself does not increase the risk of LD, the relative risk of LD attributable to IBD patients receiving thiopurines versus those not receiving therapy was 5.26 in 1 recent study. In another study, the incidence ratio of LD among those receiving infliximab compared to the general population was 6.4, suggesting a significantly elevated risk of developing LD.

LD among patients receiving thiopurines and/or TNF blockers is an uncommon but challenging complication of treatment that can mimic IBD flare. Hospitalists should be aware of the serious complication of these therapies to facilitate prompt diagnosis and treatment. Lymphadenopathy in unusual areas in patients with IBD should prompt thinking outside the box.