Case Presentation: A 32 year old male with past medical history of tobacco and alcohol abuse presented with fever, dyspnea, night sweats, cough with green sputum, occasional hemoptysis and left sided chest pain for eight days. He also endorsed a ten pound weight loss during this time. Of note patient also had a history of incarceration three years prior to presentation. He was initially seen by his primary care physician and a chest x ray was performed which revealed a single left upper lobe cavitary lesion. He was prescribed azithromycin and prednisone, however given persistence of symptoms a CT scan was done which showed multiple bilateral cavitary lesions and he was sent to the hospital for further evaluation. On presentation, patient was afebrile, hemodynamically stable and saturating well on room air with no significant findings on physical exam. Labs were significant for a leukocytosis of 17.9. Tuberculosis was ruled out with three negative acid-fast bacillus cultures and sputum cultures grew Klebsiella pneumoniae throughout the course of hospitalization. He was initially managed with IV antibiotics and then discharged on moxifloxacin for 4 weeks. A follow up CT scan twelve weeks later showed near complete resolution of the aforementioned lesions.

Discussion: Klebsiella pneumoniae is a gram negative bacteria that is a well-known cause of pneumonia, particularly in patients with prior risk factors of alcoholism, and has been isolated as a cause of pneumonia in 0.5-5% of patients internationally. Klebsiella pneumoniae pneumonia does incur a significant mortality risk, particularly if it is associated with bacteremia. In a study outlining the typical radiologic findings of acute Klebsiella pneumoniae, Okada et al described that the most characteristic features included consolidation as well as reticular opacities and though bilateral disease has been identified, the lesions are rarely described as cavitary (2,3). Findings from a separate study by Korvick, et al suggest that Klebsiella pneumoniae is usually responsible for pneumonia with unilateral infiltrates, while the less common Klebsiella oxytoca has been associated with bilateral infiltrates (1). In fact, bilateral cavitary infiltrates were more commonly described in patients who had concurrent infections with methicillin resistant staphylococcus aureus, which is not the case in our individual (2,3)

Conclusions: In this patient, with significant risk factors of prior incarceration and alcoholism as well as bilateral, multi-lobar cavitary lesions other pathogens were initially suspected such as Mycobacterium tuberculosis and Staph Aureus. However, we must always keep in mind that Klebsiella could be as one of the causative organisms which incurs high mortality if untreated, despite radiographic findings typical for other etiologies and hence initiate antibiotic treatment accordingly.
References
1. Korvick, JA., Hackett, AK., Yu, VL., Muder, RR. Klebsiella pneumonia in the modern era: clinicoradiographic correlations. South Med J. 1991 Feb; 84 (2) 200-4 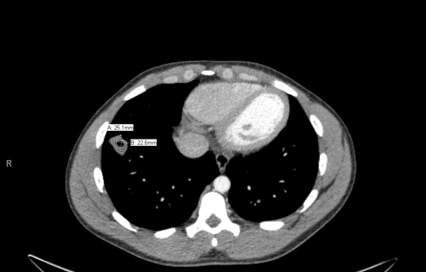 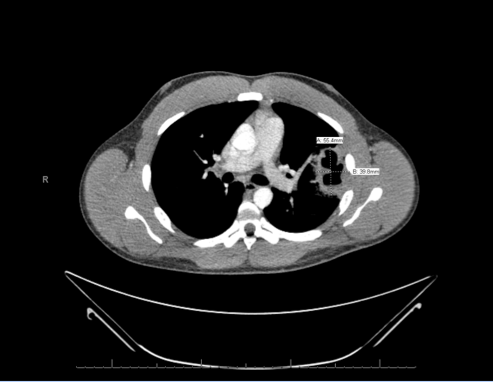