A 38‐year‐old right‐handed male presented with a chief complaint of slurred speech and difficulty ambulating. He had similar symptoms the previous day which resolved spontaneously over a few hours. On admission, all other review of systems were negative and he had no known vascular risk factors. On presentation, physical exam was notable for marked right‐sided hemiplegia, ataxia, and dysarthria. An emergent brain MRI showed no evidence of acute stroke. A chemistry panel showed that the patient's blood glucose was 37 mg/dL. His symptoms resolved within minutes after receiving 25 g of IV dextrose, satisfying Whipple's triad and suggesting a diagnosis of hypoglycemic hemiplegia. On further review of his medical history, the patient had been hospitalized 5 years earlier at another hospital with similar symptoms; at that time his glucose was 56, which was thought not to be low enough to explain his transient hemiplegia. At that time he underwent an extensive stroke workup, and was discharged on clopidogrel, with a diagnosis of cryplogenic transient ischemic attack. In the intervening time between hospitalizations, he denied any symptoms. During this hospitalization, the patient denied any history of diabetes, using insulin or oral hypoglycemic agents. His sulfonylurea screen was negative. Insulin level was 24.7 microunits/mL (normal 3.3‐22.1 microunits/mL), C‐peptide was 3.6 ng/mL (0.8–3.1 ng/mL), and proinsulin was 51.1 pmol/L (normal < 18.8 pmol/L). On strong suspicion for insulinoma, an abdominal CT scan was ordered, revealing a 1.6‐cm hypervascular mass in the pancreatic head (Fig. 1). The patient was started on diazoxide and scheduled for open surgery to remove the tumor. 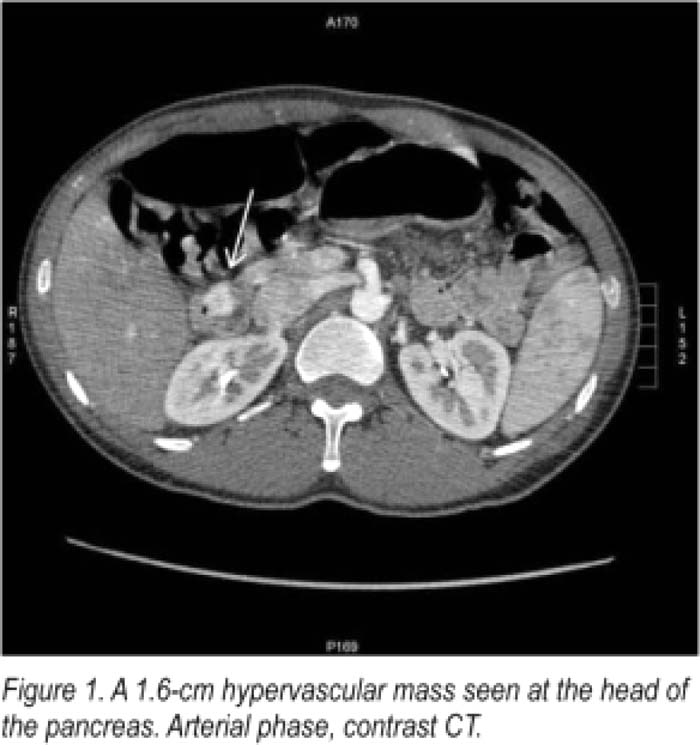 Hospitalists should consider hypoglycemia in the differential diagnosis for stroke‐like symptoms, particularly in young patients without risk factors. If symptoms resolve with restoration of normoglycemia in a patient not taking hypoglycemic agents, the diagnosis of insulinoma should be entertained.