This is a 58 year old male with no known past medical history was transferred to our facility with a chief complaint of worsening purpura on the bilateral lower extremities, chest, back, face and pinnae. The patient stated that the lesions began 3 weeks prior to presentation and were slightly raised, non‐painful and without any apparent blistering, and were initially located only on the abdomen. Since that time, they had expanded to involve his chest, back, abdomen, upper and lower extremities, and pinnae bilaterally. The majority of the lesions had become bullous and painful. He had experienced a similar, but less extensive and non‐bullous lesion 9 months prior which occurred on the pinna of his left ear, and a second lesion 3 months prior on his anterior right tibia. The lesion of the pinna had not resolved. The tibial lesion had become bullous, then lysed and remained ulcerated. Patient denied taking any medications, including antibiotics, NSAIDs or supplements. He denied cigarette smoking and initially denied illicit drug use, however upon repeat questioning admitted to a 25‐year history of snorting approximately 1 gram of cocaine twice weekly. Laboratory studies are shown: No electrolyte abnormalities noted.

Levamisole contaminates approximately 80% of the US cocaine supply and has been also found as a contaminant in heroin supplies seized and tested by the US Drug Enforcement Agency.

Use of levamisole‐adulterated cocaine is associated with a distinctive clinical syndrome characterized by purpura and cutaneous necrosis, thrombosis of small cutaneous vessels, and autoantibodies, including LAC, IgM antibodies to cardiolipin, and higher‐titer ANCAs with specificities for neutrophil elastase, lactoferrin, cathepsin G, PR3 and MPO.

The predominant histopathology in the case reports and case series is a small‐vessel thrombotic vasculopathy as seen on our case. Other extracutaneous manifestations include large joint arthralgias seen in up to 83% of the patients that were not seen in our case. Also agranulocytosis mentioned in most case reports was absent in our case however a retrospective chart review showed that incidence amongst levamisole positive cocaine users was as low as 2.1%. Our patient received a 10 day course of steroids showing improvement of the skin lesions on a daily basis however discontinuation of the offending agent is the mainstay of treatment and it is not known if systemic steroids are required for resolution. 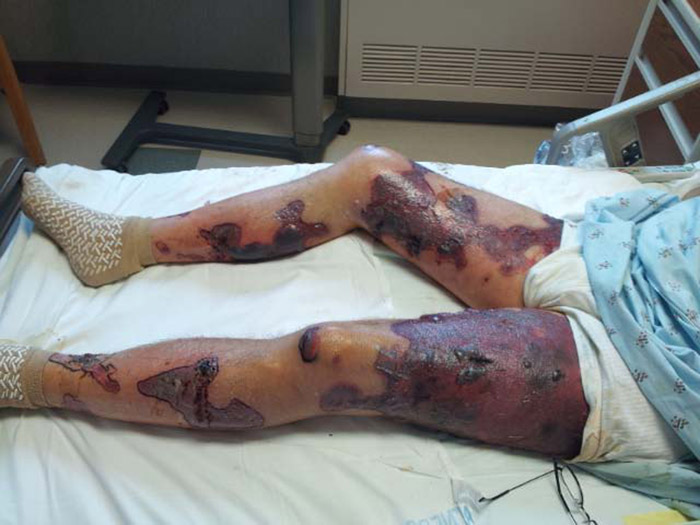