A 54-year-old male with heavy alcohol abuse was brought to the emergency department by his daughter. He has a long standing history of alcohol abuse for many years and drinks more than 3 bottles of wine daily. On initial presentation, he was tachycardic and the sodium was 139.He was initially admitted to the medical floor but developed symptoms consistent with Delirium Tremens despite high doses of benzodiazepine and required transfer to ICU. He was intubated , treated with Precedex and high dose of thiamine. He was extubated after 10 days, but remained confused, agitated and disoriented .The lower extremity had reduced tone with hyperactive reflexes  and few beats of sustained myoclonus at the right ankle. He was unable to stand even with assistance and was having nonsensical speech and not following commands. MRI of the brain with gadolinium contrast showed triangular area of increased T2 signal intensity in the mid pons with T2 shine through effect on diffusion weighted sequence consistent with osmotic demyelinosis. His sodium levels remained normal thorough out the hospital stay. His confusion improved after 3 weeks and the repeat MRI showed marked improvement of the lesions in the pons.

Central Pontine Myelinolysis(CPM), also known as osmotic myelinolysis is an acquired, symmetrical, circumscribed, acute or sub-acute non-inflammatory demyelinating lesion normally localized in the brainstem pons. It is usually caused by osmotic disturbances due to hyponatremia or rapid correction of the sodium and quite rare in patients with normal sodium. There are only very few cases of CPM in chronic alcoholic patients with normal sodium.

The precise mechanism by which cell injury occurs in CPM is unknown, but osmotic vascular endothelial injury plays a major role. One theory is that, hypertonic insult in the pons can cause CPM in normonatremic patients. Pons have less mechanical flexibility due to the grid arrangement of the oligodendrocytes and the close proximity to vascularized gray matter make it susceptible to the release of myelin toxic  factors, production of vasogenic edema and resultant injury to oligodendrocytes

The clinical picture of CPM is highly variable and includes quadriplegia, lethargy, ataxia, pseudo bulbar symptoms like dysarthria and dysphagia, tremor, Para paresis and. locked in syndrome. The Magnetic resonance images may show large symmetrical lesions in the basis pontis, usually sparing the ventral pons, or there may be smaller “butterfly” or trident shaped lesions in the base of the pons. The images probably reflect a combination of edema and demyelination. As the acute process subsides with time, the lesion may become smaller. There is no correlation between the size of the lesion and the severity of the disease. The treatment is usually supportive, but treatment with Thyrotropin-releasing hormone (TRH), methylprednisolone, plasmapheresis and immunoglobulin have been reported, but no randomized trials have been conducted to confirm the efficiency of these treatment options. The outcome for patients with CPM is variable and may take several months for clinical improvement. In patients who have recovered from CPM, a repeat MRI scan of the brain showed improvement of the hyperintense lesion.

Physicians must be aware of the occurrence Central Pontine Myelinolysis (CPM) in alcoholic patient even with normal sodium. Early MRI of the brain and supportive therapy is vital in diagnosing and managing CPM, which might take several months for recovery. 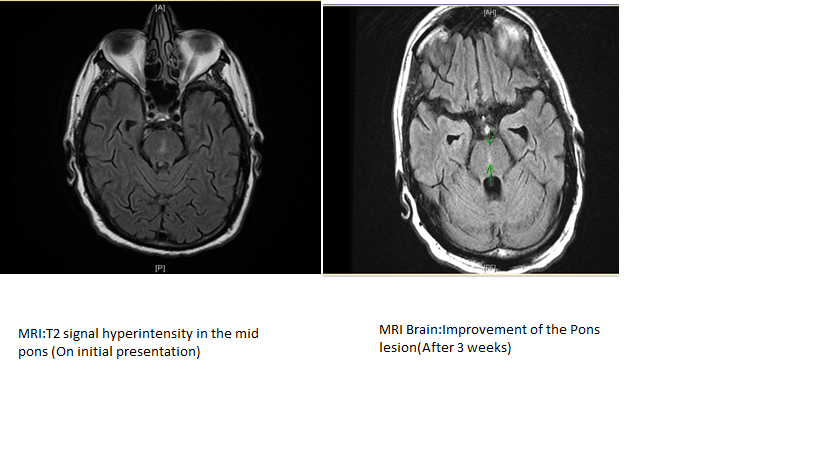