Several care transition interventions have proposed that post‐discharge phone calls reduce adverse events, and decrease costly return visits to the hospital. However, given the multi‐faceted nature of most care transitions interventions, the true relationship between post‐discharge phone calls and readmissions in a real world setting is uncertain.

From June of 2010 to May 2012, 4 nurses at a 600‐bed academic medical center aimed to call all patients returning home within 72 hours of discharge from the medicine service. The nurses received an administrative list of all patients discharged home during the preceding 2‐3 days, which guided their calls. Some patients were unable to be called due to errors in the administrative discharge list (incorrect discharging service, incorrect discharge location), high census and nursing sick leave. Nurses attempted two calls within 72 hours of discharge, and followed a standard script to address common issues associated with hospital readmission. Administrative data was used to capture socio‐demographic data and comorbidities, as well as readmissions to the medicine service. We used logistic regression adjusting for patient and clinical covariates as well as a propensity score representing likelihood of being called to determine the association between call receipt and risk for readmission.

The original sample included 5848 patients discharged home with a readmission rate of 12.6%. After pre‐defined exclusions (figure), the final eligible sample was 5507 patients, with an overall all‐cause 30‐day readmission rate of 7.2% (397 readmissions). Patients who received a call attempt were significantly more likely to be younger, male, Caucasian, married, speak English and have private health insurance. In unadjusted analyses, patients who received a call and completed the intervention were significantly less likely to be readmitted compared to those who did not (155 (5.8%) vs 123 (8.6%), p<0.01). In multivariable models adjusting for socio‐demographic and clinical covariates but not the propensity score, patients who completed the post‐discharge telephone call intervention had lower odds for readmission (AOR 0.71; 95% CI:0.55‐0.91). However in models including the propensity score accounting for the likelihood of receiving the phone call no association between call receipt and readmission was observed (AOR 0.91; 95%CI:0.69‐1.20).

Apparent effectiveness of post‐discharge phone call programs may be more related to whether or not patients are able to answer a phone call than to the phone call itself. Our findings highlight the challenge of real‐world readmissions interventions like clinical coaches, home services and follow up phone calls reaching those most in need. 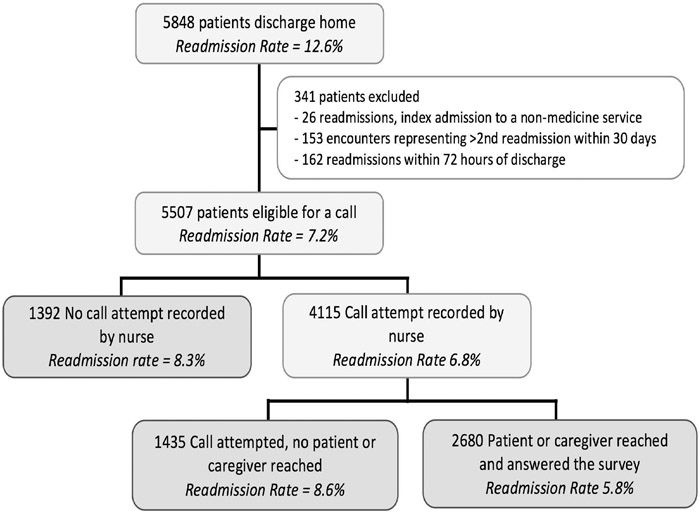