A 7‐monlh‐old African American male presented to the ED with a 3 day history of vomiting. Emesis was initially nonbilious but had become bilious in the past 24 hours. ROS was noted for cough, 1 episode of diarrhea, and lethargy. Examination was noted for normal vital signs and a soft abdomen that was nondistended but had hypoactive bowel sounds. An abdominal x‐ray showed multiple dilated distal small bowel with a soft‐tissue density in the right lower quadrant. Thinking intussusception, a barium enema was performed using water‐soluble contrast. The ileocolic intussusception was not able to be reduced. After a pediatric surgical consultation, the patient underwent a laparotomy. In the OR, it was noted that there was no evidence of intussusception. Instead, a cecal mass was present, which was suspicious for a cystic duplication. The cyst was resected, and an ileocecectomy with ilea colostomy was performed. Pathology report showed that it was a benign submucosal cystlined by gastric type mucosa, consistent with a duplication cyst. 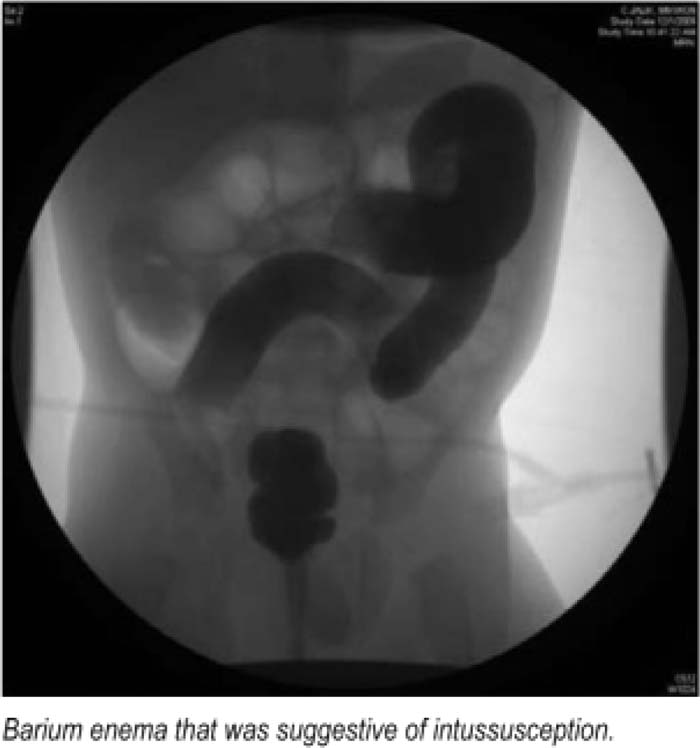 Duplications of the alimentary tract involve the mesenteric side of the associated alimentary tract. The terminal ileum is the most common site, whereas rectal, duodenal, gastric, and cecal duplications are extremely rare. The symptoms and findings depend on the size, location, and type of mucosal lining and include abdominal pain, vomiting, intestinal obstruction, and a palpable mass. Radiographic studies may aid in the diagnosis; however, the final diagnosis is often made intraoperatively.