Case Presentation: The patient is a 75-year-old woman with seropositive RA with polyarthropathy, who had recently started adalimumab presented with a diffuse skin eruption. She had been previously treated with tocilizumab (4mg/kg monthly), methotrexate (10 mg weekly), and prednisone (5 mg weekly), with declining therapeutic effect. She was to undergo treatment with adalimumab (40 mg / 2 weeks). The patient reported that she administered a first adalimumab injection in the right lower abdominal quadrant two weeks prior to dermatologic evaluation. One day prior to dermatologic evaluation, she noted a round rash at the injection site and then overnight developed multiple skin lesions. She reported pruritus but otherwise felt well. Of note, she had taken 2 g of amoxicillin four days prior for a dental procedure. She had no additional medications. Physical examination revealed an 8 cm round erythematous patch with central, dusky hyperpigmentation over the right abdomen (Figure 1). There were numerous 3-8 mm urticarial macules and papules scattered over the legs, trunk, and arms, some with dusky centers (Figure 2). Urticarial patches were present on the palms. Oral mucosa and conjunctivae were unremarkable.
A punch biopsy of the abdominal injection site showed perivascular lymphocytes and eosinophils, indicative of a drug eruption. Punch biopsy of an urticarial papule on the left thigh showed leukocytoclastic vasculitis, characterized by fibrinoid degeneration of small blood vessels and a mixed infiltrate, with abundant neutrophils and prominent nuclear dust.

Various adverse events have been reported in clinical trials of subcutaneous TNF-α inhibitors, most commonly injection site reactions (ISRs). ISR, by definition, includes any of: erythema, pruritus, hemorrhage, pain, or swelling at the injection site. ISRs to adalimumab are rarer in relation to etanercept and systemic reactions are very rarely described.

Leukocytoclastic vasculitis (LCV) is a small vessel vasculitis involving dermal postcapillary venules. Drugs cause roughly 10% of LCV, which generally manifest between 7 and 21 days following treatment. Numerous studies have associated anti-TNF-α therapy with vasculitis, most commonly cutaneous vasculitis (most prevalent in patients with RA). During RA clinical trials using adalimumab, the incidence of LCV was 0.01 events per 100 person-years of exposure. The pathogenesis of anti-TNF-α associated vasculitis remains unclear. One hypothesis is that anti-drug host antibodies initiate an immune-complex mediated hypersensitivity reaction. Another theory suggests that TNF-α antagonists induce a switch from the predominant T helper 1 (Th1) profile of RA to a Th2 response.

Conclusions: We report the case of a 75-year-old woman who developed marked ISR and systemic biopsy-proven LCV after initiating adalimumab for RA. Given the injection site localization and the time course, adalimumab was presumed to be causative. It is possible that amoxicillin could also have caused the diffuse eruption. Our patient was successfully treated with discontinuation of adalimumab and initiation of corticosteroid therapy, with antihistamines as needed. 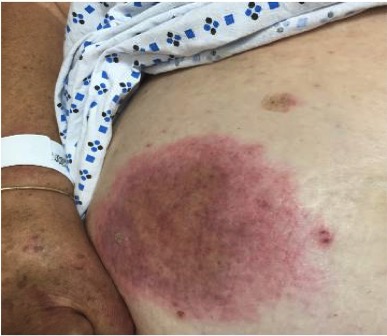 IMAGE 2: Figure 2: Numerous 3-8 mm urticarial macules and papules scattered over the legs, some with dusky centers. 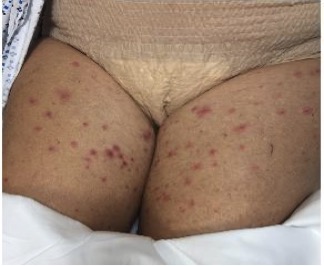