A 71‐year‐old man with a reduced left ventricular ejection fraction due to prior MI, diabetes mellitus, and a single‐chamber ICD presented with numerous ICD shocks. His medication list included glyburide, gabapentin, carvedilol, spironolactone, tramadol, pantoprazole, insulin, allopurinol, furosemide, isosorbide dinitrate, digoxin, and aspirin. In the ER, an electrocardiogram revealed a ventricular‐paced sinusoidal rhythm at a regular rate and a blood pressure of 90/40 mm Hg. The rhythm was sinusoidal with a blood pressure of 90/40 mm Hg. His serum potassium was 8.3 mmol/L and serum glucose > 500 mg/dL The patient did not take his insulin that day due to feeling weak. There was no anion gap or acidosis present on admission to suggest diabetic ketoacidosis. His creatinine at his baseline was 2.0 mg/dL His ICD interrogation revealed several inappropriate ICD shocks secondary to QRS widening and triple and quadruple counting of the QRS in addition to T‐wave oversensing. He was found to have a normofunction alerted Fidelis lead. The etiology of his hyperkalemia was believed to be secondary to potassium‐sparing diuretics and a high‐potassium diet. His hyperkalemia resolved with the administration of insulin, albuterol, and sodium polystyrene.

In summary, we present a case of inappropriate ICD shocks secondary to hyperkalemia‐induced QRS widening in a patient with a Fidelis Lead. Hyperkalemia‐induced ICD oversensing is a rare phenomenon reported in the literature. Usually ICD oversensing involves T‐wave oversensing although the case presented above demonstrates QRS double and triple counting secondary to QRS widening. Hyperkalemia has a greater effect on ICD function than any other metabolic abnormality. It may increase the pacing threshold, cause T‐wave oversensing, and may double‐ or triple‐count R waves. Fidelis lead fracture has recently been a significant cause of hospitalization for inappropriate ICD shocks. Although in our case, the Fidelis lead integrity was preserved, one must remain aware of the possibility of a defective Fidelis lead. A large 518 patient European Study in 2007 investigating complications of ICD ventricular oversensing revealed 38 (7.3%) inappropriate shocks. T‐wave oversensing represented 26% of events while double‐counting of the QRS represented less than 10% of inappropriate shocks. Of those inappropriate shocks secondary to double‐counting, 1patient had an underlying intraventricular conduction delay coupled with an older biventricular system, whereas the other 3 patients had a widened QRS. 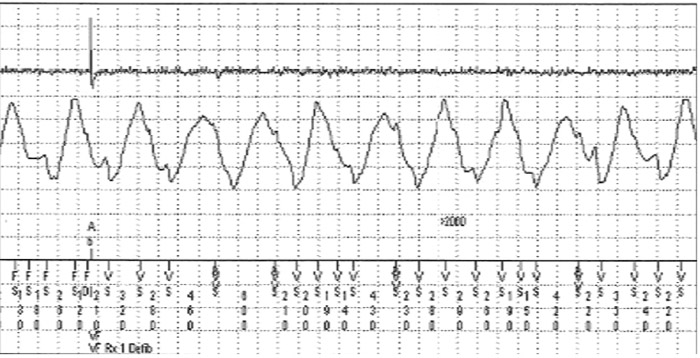