Online personal health records (PHR) can provide opportunities for hospitalized patients to engage in their care during and after discharge but patient use of PHRs in these settings has not been studied to date. Our objective was to assess effects of a bedside intervention to increase inpatient engagement with their PHR.

We developed a bedside intervention using iPad tablets for inpatients at our hospital to engage with their PHR for specific tasks: view their medications, test results, appointments, and provider messages. Intervention patients received a brief (15‐30min) tutorial on PHR use tailored to individual abilities including “teach back” for viewing medications specifically. Inclusion criteria were age ≥18, non‐ICU, no cognitive impairment, English‐speaking. We also created a control cohort of medicine patients admitted to our hospital in the same time period (Dec 2012‐Nov 2013) and used paired t‐tests and multivariable regression analysis (adjusted for age, gender, race/ethnicity, LOS, and prior PHR experience) to characterize effects of our intervention on PHR use during hospitalization and 7 days after discharge.

During hospitalization, the mean number of PHR logins was similar in both groups. Mean views for medications was higher in the intervention group but mean views for provider messaging inbox was higher in the control group (Table 1). In MV regression, intervention patients were more likely to view their medications (OR 2.5, CI 1.4‐2.9) but less likely to view their provider messaging inbox (OR 0.72; 95% CI 0.53‐0.99).

Within 7 days after discharge, the mean number of PHR logins was similar in both groups (Table 1). Mean views for medications was still higher in the intervention group but there was no longer a difference in provider messaging inbox views. In MV regression, there were no significant associations for any PHR actions in Table 1 by intervention status.

Patients who received bedside training on how to use their PHR, including “teach back” for viewing medications, were more likely than a control cohort to view their medications during hospitalization but not after discharge. Future inpatient PHR interventions should further explore “teach back” features for other PHR tasks with additional emphasis on post‐discharge PHR use. 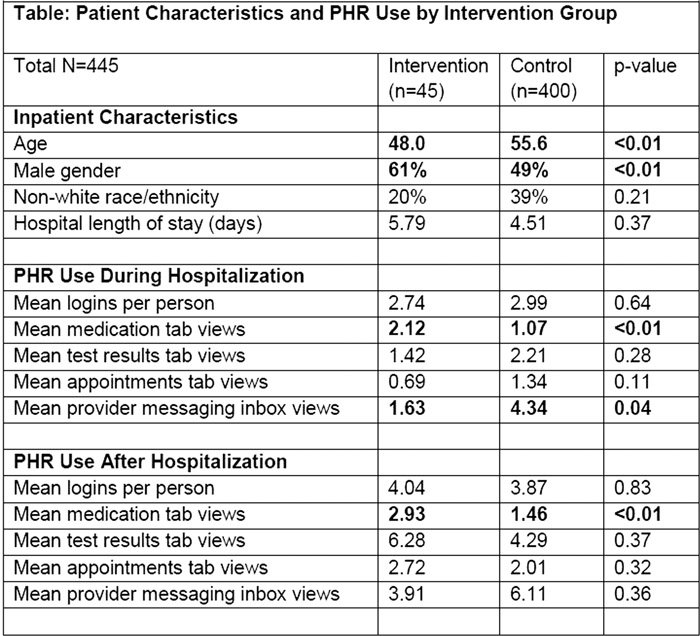