Venous thromboembolism prophylaxis (VTEP) decreases rates of deep vein thrombosis among inpatients, and increasing VTEP use is a common target for quality improvement initiatives. However, little is known about the balance of appropriate versus inappropriate use, which results from efforts to increase VTEP use. We studied the effect of a standard admission order form on rates of appropriate and inappropriate usage of VTEP among medicine inpatients.

We implemented a standard admission order form at our institution in August 2006, at which time use of the form for all admissions became mandatory. The order form included a module that gave instructions [based on recommendations from the American College of Chest Physicians (ACCP)] about which patients should receive VTEP, as well as standard VTEP treatments that could be selected and activated by checking a box. Using administrative data, we then conducted a retrospective study of internal medicine patients admitted between July 1, 2005, and December 31, 2008. We measured rates of prescription of VTEP (receipt of heparin or low‐molecular‐weight heparin at prophylactic doses within the first 2 days of admission) before and after order form implementation. We classified use of VTEP as appropriate if patients met ACCP criteria at admission and as inappropriate if patients did not meet these criteria or if they had a contraindication at baseline including active bleeding or need for fulldose anticoagulation. Comparisons across groups were modeled by multivariate logistic regression with interrupted time series adjusting for age, sex, race, ethnicity, and Elixhauser Comorbidity. All data analyses were performed using STATA11. 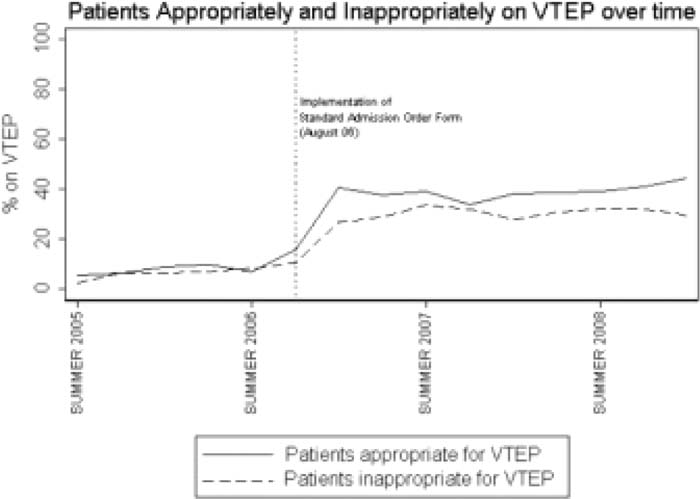 R. Khanna, none; J. Maselli, none; E. Vittinghoff, none; A Auerbach, none.