Case Presentation: Human Herpes Virus 6 (HHV-6) is a member of the herpesviridae family. HHV-6 is the causative agent in roseola infantum, a usually mild and self-limiting childhood exanthem. HHV-6 is also associated with a variety of syndromes in recipients of hematopoietic stem cell transplantation (HSCT), including hepatitis, encephalitis, and bone marrow suppression. However, HHV-6 infections are rare in immunocompetent adults, and their clinical impact is unclear.
A previously healthy 51-year-old Caucasian female presented as a transfer from outside facility for acute encephalopathy and refractory seizures despite the use of various anti-epileptic drugs, which occurred intermittently over one month. Previous MRI showed no pathologic hyperintensity or leptomeningeal enhancement.

At presentation, patient was hemodynamically stable, but was disoriented, and was seen pulling at IV lines and yelling out in incomprehensible sentences. Physical examination was otherwise normal with no focal neurological deficits. Laboratory evaluation was unremarkable, including negative HIV testing. Immunodeficiency panel showed CD4 and CD8 counts within normal limits.

Patient was initially started on acyclovir, which was transitioned later to ganciclovir for 14 days. Seizures resolved, but mental status showed only fair improvement. Patient continued to exhibit agitation, confusion, and restlessness, but was eventually removed from restraints and was discharged home with her mother.

Discussion: HHV-6 reactivation is associated with severe forms of encephalitis among HSCT recipients; however, HHV-6 meningoencephalitis in immunocompetent adults is rare, with only a few case reports in the literature. Our patient exhibited refractory seizures of new onset, which prompted lumbar puncture. Diagnosis was suggested given MRI changes in the temporal lobe, and was later confirmed using PCR in CSF. Extensive immunodeficiency panel was unremarkable, further confirming immunocompetent status. The efficacy of ganciclovir and other antiviral therapies remains suboptimal and linked to toxicity. Our patient clinically improved promptly with proper therapy, but without complete resolution of symptoms.

Conclusions: Clinicians should include HHV-6 in the differential diagnosis of encephalitis of unknown etiology in immunocompetent adults to initiate proper antiviral therapy in timely manner in order to improve outcome. 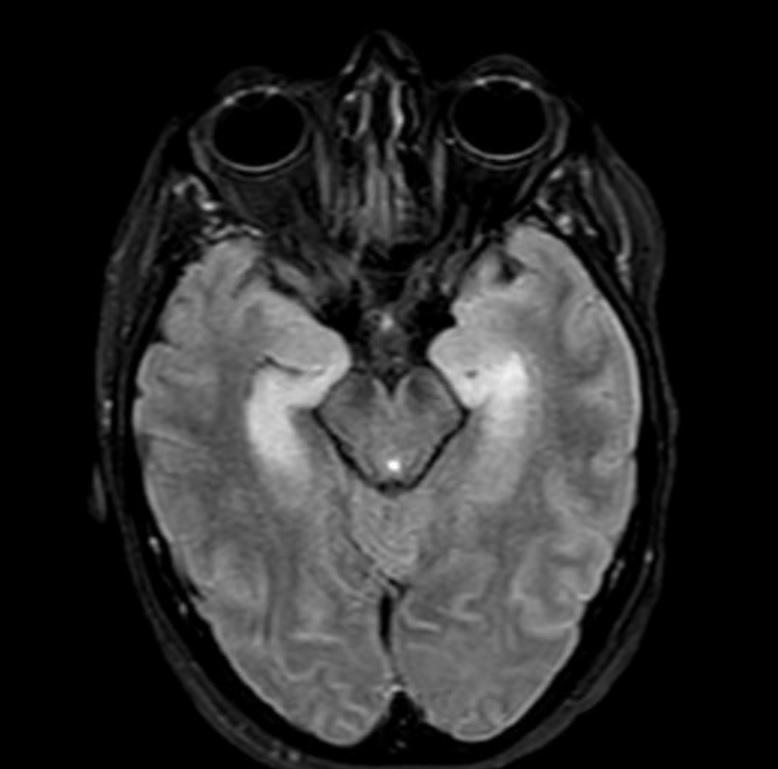