Case Presentation:  76 year-old man presented with multiple episodes of vomiting and melena for 1 day. He was postop day 11 after laparoscopic cholecystectomy. His PMH included gall stone pancreatitis, partial gastrectomy in remote past, DM type 2, CAD and PVD. His physical exam was unremarkable except for a fever of 102F. Lab revealed Hemoglobin of 7.0 g/dl and CBC of 24,000. An initial CT abdomen revealed a 7.1X10.3X9.7 cm complex hepatic abscess vs infected hematoma. He was started on broad spectrum antibiotics for sepsis. Surgery recommended against surgical intervention and patient responded appropriately to continued supportive care with antibiotics and blood transfusion.His blood cultures grew VRE and Enterobacteria. After a negative workup for endocarditis a PICC line was placed and plans made for discharge to long term post acute care facility. On hospital day 8 patient was hypotensive, diaphoretic with melena episodes.GI was consulted and he underwent UGI endoscopy which didn’t reveal any bleeding source. The anastomosis from gastrectomy was intact. Patient had further melena associated with Hemoglobin drop down to 6.5,and 4 more units of blood were transfused. On hospital day 12 patient had further hematochezia episodes after which a tagged RBC scan was done. It revealed hyperemic rim of liver compatible with known hepatic abscess. Patient continued to have recurrent hematochezia and a repeat tagged RBC scan was again negative. Patient required another 6 units of blood transfusion during the following 2 days. He then had a repeat CT scan which revealed a large hematoma increased in size to 11X11X13cm with new arterial focus near the right hepatic artery concerning for arterial erosion versus pseudo aneurysm. Angiography demonstrated a large hepatic artery pseudo aneurysm at the site of hepatic abscess and severe celiac ostial stenosis. Patient had successful percutaneous transluminal angioplasty of severe celiac artery to provide access to the hepatic arterial vasculature. He further had a successful coil embolization of right hepatic artery pseudo aneurysm. Patient remained hemodynamically stable after the procedure and no further blood transfusion was required. Discussion:  GI Bleeding is commonly encountered by hospital physicians. Often times a full GI work up fails to reveal the etiology and patient continues to have hemodynamically significant bleed which presents diagnostic dilemma. Hepatic artery pseudo aneurysm should be considered in patients especially if they had recent invasive GI procedure. It is a rare but clinically significant cause of GI bleeding. It is defined as leakage of blood into surrounding hepatic parenchyma by a tear/disruption in the arterial wall. Early arteriography should be done in patients with suspicion of this diagnosis. Conclusions:  Hepatic artery aneurysms are a rare entity and even less common cause of gastro­intestinal bleeding. It is been a recognized complication of invasive diagnostic and therapeutic hepatobiliary procedures like laparoscopic cholecystectomy. As hepatobiliary diagnostic and therapeutic modalities become more common, we should expect more such cases as an etiology of massive upper gastrointestinal bleeds. These are surgical emergencies and generally bleeding is controlled by trans arterial coil embolization. Occasionally a laparotomy may be required to control the bleeding. A high index of suspicion is necessary for early diagnosis and treatment especially given a high reported rate of spontaneous rupture of 44% leading to high mortality. 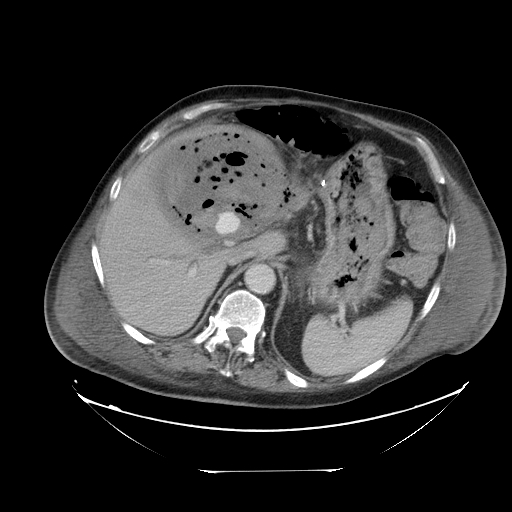