Despite the fact that there are rather equal numbers of men and women entering and graduating from medical school, disparities still exist for women in medical leadership roles and academic productivity. Some studies have suggested that gender differences disappear when looking at younger cohorts. Hospital Medicine is a relatively new field. The majority of hospitalists are in the 31‐40 age range and the specialty has nearly equal gender distribution. Our objective was to determine whether gender differences exist in leadership roles, academic productivity and representation on a national level in Hospital Medicine.

The study consisted of two parts: (1) A survey of academic hospitalist Divisions/Sections at teaching institutions with membership or affiliation with medicals schools in the Association of American Medical Colleges (AAMC) to assess the proportion of male to female Division/Section Heads; (2) An assessment of the gender of first and last authors in the Journal of Hospital Medicine (JHM) and the Journal of General Internal Medicine (JGIM) and of the speakers at the national Society of Hospital Medicine (SHM) and Society of General Internal Medicine (SGIM) meetings from 2006 to 2012. Gender and profession were determined from providers’ names, Internet searches, data provided in pamphlets for conferences, directly calling the institution and data provided in publications. Data were analyzed with a Chi‐square test for equal proportions. The study was approved by the Colorado Institutional Review Board.

Despite hospital medicine being a newer field with a younger cohort of physicians, disparities persist for women in academic productivity and leadership roles. 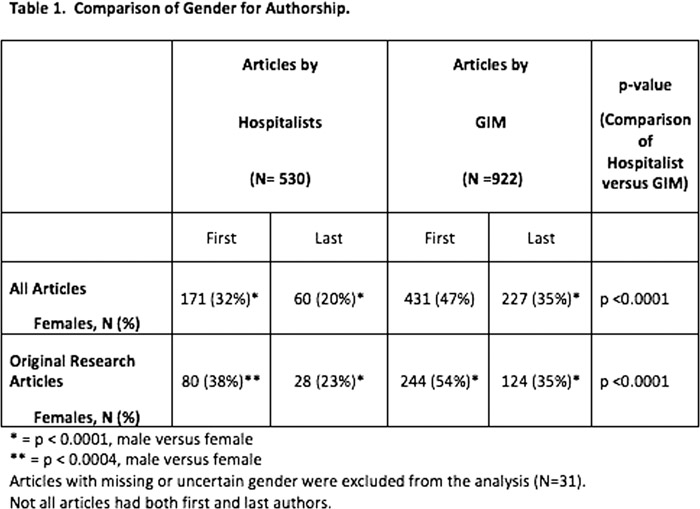