A 71‐year‐old man with history of chronic atrial fibrillation was admitted to our hospital with an acute flare of chronic obstructive pulmonary disease. On examination, in addition to signs of respiratory distress and irregular cardiac rhythm, an ulcer measuring 15 × 12 cm with a central necrotic eschar was noted in the right subscapular area (Fig. 1). The ulcer had well‐demarcated, almost rectangular margins with telangiectasias. On further questioning, he reported having noticed skin discoloration and burning pain over his back almost 7 years earlier, after hospitalization and treatment for a cardiac problem. Itching and redness had developed subsequently with eventual ulceration over a period of weeks. He had been treated with antibiotics and topical steroids for several bouts of infection of the ulcer over the years. On reviewing his medical record, it became apparent that he had undergone radiofrequency (RF) ablation for atrial flutter 2 weeks prior to the onset of cutaneous symptoms. The procedure had been technically challenging, lasting 11 hours with a prolonged fluoroscopy time of 170 minutes. A diagnosis of fluoroscopy‐induced chronic radiation dermatitis (FICRD) was considered, and plastic surgery consultation was obtained. Biopsies of the ulcer revealed atypical stromal cells, dermal fibrosis and fat necrosis, consistent with FICRD. He underwent wound debridement, wide excision, and myocutaneous skin flap closure. Surgical specimens also revealed squamous cell carcinoma without involvement of wound margins. At follow‐up 1 year after surgery, his skin had healed well.

Coronary angiograms and RF ablation for cardiac arrhythmias are among the estimated 700,000 fluoroscopy‐guided procedures performed annually in the United States. The skin is a moderately radiosensitive organ and is exposed to high radiation doses of 0.02–0.05 Gy/min of fluoroscopy, sometimes up to 0.5 Gy/min, depending on the operator and the procedure complexity. FICRD is a nonstochastic reaction, occurring at a threshold of 10 Gy. It is commonly misdiagnosed because the skin lesions resemble various other skin disorders. The spectrum of cutaneous changes varies from erythema, telangiectasias, and epilation at a dose of 2–6 Gy to ulceration and malignancies at a dose of 10–12 Gy. The relation between onset of skin symptoms and fluoroscopy is often overlooked because of the variable onset of skin lesions, ranging from 15 days to 10 years after exposure. However, the characteristic geometric ulcers over areas that receive the highest radiation such as the scapular, mid‐axillary, and anterior chest are useful clues. Squamous cell carcinoma and superinfection of ulcers are frequent complications. Medical therapy is usually unsuccessful, and surgery is the mainstay if ulcerations ensue. 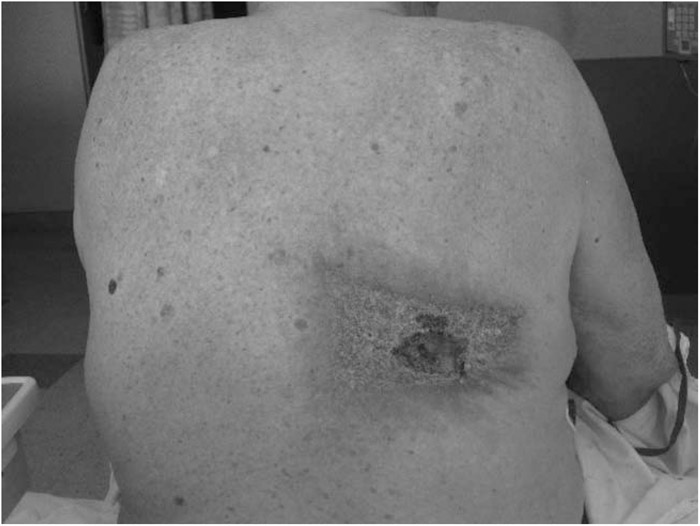 Fluoroscopic procedures are increasingly preferred as less invasive options for diagnosis or therapy of many diseases. It is important for hospitalists to be cognizant of the extensive radiation exposure with fluoroscopy.