A 62‐year‐old woman with a medical history of chronic obstructive pulmonary disease (COPD), renal insufficiency, and chronic atrial fibrillation was admitted to the hospital for treatment of community‐acquired pneumonia and exacerbation of her COPD. She was treated with empiric antibiotics and steroids, and also started on intravenous heparin for her atrial fibrillation with a subtherapeutic INR. Her clinical status declined, and she required intubation with mechanical ventilation as well as dialysis. On hospital day 11 she complained of left lower quadrant abdominal pain, and her white blood cell count rose from 8 to 27,000/mm3. By hospital day 12 her white blood cell count was 73,000/mm3. A Clostridium difficile toxin assay and blood, sputum, and urine cultures were all negative. Later that day she became hypotensive, requiring norepinephrine infusion, and had a lactic acid level of 7.7 mmol/L. It was also noted that her hematocrit had dropped from 32% to 26%. Palpation of the abdomen revealed subcutaneous fluid from the left anterior abdomen to the upper groin. A CT scan of the abdomen revealed a large rectus sheath hematoma. Pelvic arteriography showed extravasation of contrast from the left inferior epigastric artery. She underwent pelvic arteriography with em‐bolization but continued to bleed and required multiple transfusions. Of note, with the transfusions her white blood cell count decreased to 28,000. Subsequently, her dialysis catheter clotted, and herfamily declined to continue aggressive care; the patient died the next day.

Spontaneous rectus sheath hematoma (RSH) is an uncommon cause of acute abdominal pain and very rarely leads to death. It is most often related to a tear in the perforating branches of the inferior epigastric artery. Predisposing factors include anticoagu‐lation, subcutaneous injections, and any condition that leads to increased intra‐abdominal pressure, such as violent coughing, straining, or pregnancy. It is 2 to 3 times more common in women. Most rectus sheath hematomas resolve with conservative measures, such as stopping anticoagulation. Leukemoid reactions secondary to massive bleeding are uncommon but well described, particularly in cases of subarachnoid hemorrhage, and are triggered by tissue hypoxia and a systemic stress response. 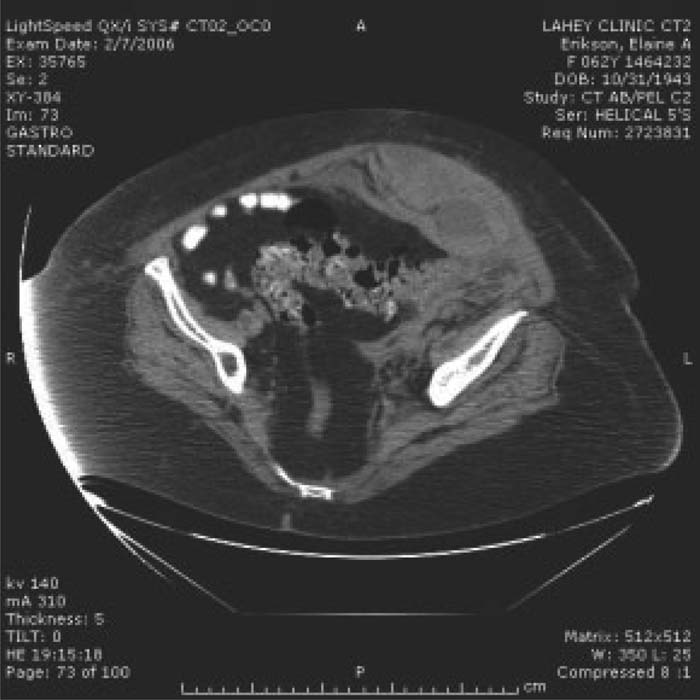 With the increasing use of anticoagulants, hospitalists should be aware of this uncommon but potentially fatal condition. In addition, a profoundly elevated white blood cell should prompt consideration of causes in addition to infection or myeloproliferative disorders, such as occult hemorrhage.