In April 2009, a large academic medical center switched the low‐molecular‐weight heparin (LMWH] on its formulary from enoxaparin to dalteparin. This formulary change was studied to determine how venous thromboembolism (VTE) prophylaxis rates and events were affected. Because unfractionated heparin (UFH) remained a prophylaxis option before and after the LMWH change, the process measure of interest focused on any corresponding usage change in UFH. The outcomes measure evaluated was the change in rate of VTE and antiooagulation‐retated adverse events.

To monitor process changes, all patients with orders for VTE prophylaxis within tfie first 24 hours of admission were reviewed from October 2008 to October 2009, comprising 17,788 patients. If a patient had an order for LMWH, UFH, or warfarin within 24 hours of admission then they were considered to have received pharmacologic VTE prophylaxis. These patients wene then categorized based on the prophylaxis drug that was ordered. To monitor outcome changes, ICD‐9 coded data were reviewed to determine if there was any change in VTE outcomes and to evaluate complications from anticoagulation, designated by ICD‐9 code E934.2. E934.2 is used when there is an adverse effect such as supratherapeutic INR and/or bleeding because of anticoagulalion drugs. 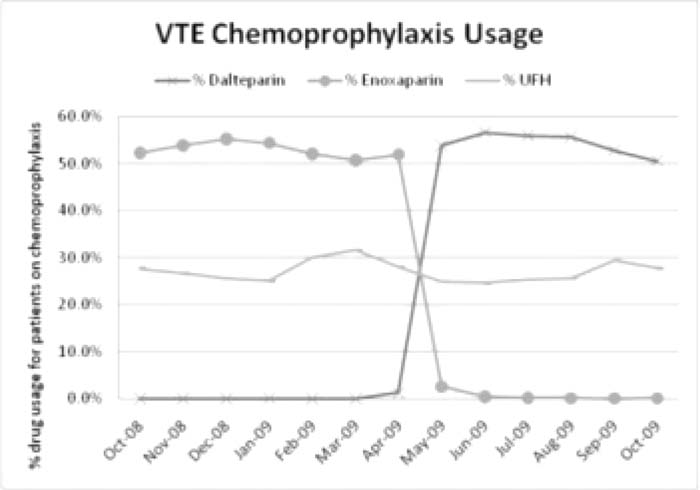 The formulary change from enoxaparin to dalteparin did not change physicians' ordering practices as it related to the use of UFH as hypothesized. In addition, the LMWH formulary change did not affect the incidence of VTE or complications from anlicoagulalion. Thus, this study provided validation in a practice setting of prior research that showed similar efficacy and anticoagulation‐related adverse events for both LMWH preparations.