The study took place at a 400‐bed university hospital. The patient population was adult inpatients on non‐critical care units with point‐of‐care (POC) glucose testing from November 2002 through December 2005. There were 2 main interventions: (1) a standardized subcutaneous insulin order set, encouraging the use of basal, nutritional, and correction‐dose insulin, introduced in November 2003; and (2) an insulin management algorithm, introduced in May 2005. This 1‐page algorithm provided guidance on insulin dosing and monitoring and provided preferred regimens for patients in different nutritional situations. The algorithm was widely available electronically and used for case‐based teaching. We devised metrics to monitor insulin use patterns, hypoglycemia rates, and glycemic control in order to gauge the impact of the interventions. Institutional review board approval was obtained

Insulin orders were sampled each month to assess basal insulin usage. The percentage of insulin regimens incorporating basal insulin improved from 29% over several months of baseline observation to consistently greater than 70% after the intervention.

The mean glucose of each patient while hospitalized was calculated using POC glucose data from hospital days 1‐14. The percentage of patients with a mean glucose ≤ 180 mg/dL improved from 63% (baseline) to 68% (standardized insulin orders) to 73% (postalgorithm), P < .02 (Pearson chi‐square test). The percentage of hospital days when all glucose values were in the range of 60‐180 mg/dL improved in a similar fashion. 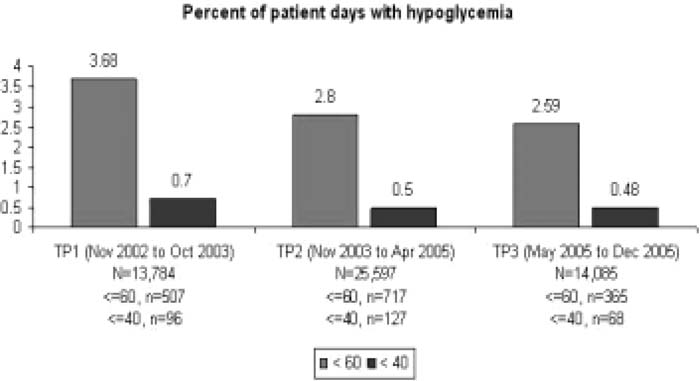 We monitored 11,057 patients over 53,466 patient‐days. The percentage of monitored patient‐days with hypoglycemia (any glucose ≤ 60 mg/dL) improved from 3.68% (baseline) to 2.80% (standardized insulin orders) to 2.59% postalgorithm (P < .02, Pearson chi‐square test). Extreme hypoglycemia (any glucose ≤ 40 mg/dL) was reduced significantly in a similar fashion (see the figure).