A 50 year old man with a past medical history of coronary artery disease and COPD presented with complaints of recurrent syncope.  These episodes occurred about 5 to 7 times weekly.  Additional symptoms included increasing shortness of breath and orthopnea.  Vitals showed a blood pressure of 89/61 mmHg and he was not orthostatic.  Physical exam was notable only for a mild late expiratory wheeze.  Labs were significant for a hemoglobin of 10.2 g/dL and a BNP of 1589 pg/mL.  Chest x-ray revealed mild cardiomegaly and mild pulmonary edema.  ECG showed sinus rhythm with low voltage and poor R wave progression in the anterior leads.  Echocardiogram revealed mild left ventricular (LV) systolic dysfunction, moderate concentric LV wall thickening, a thickened right ventricle, bi-atrial dilatation, mitral and tricuspid valve thickening.  These findings were suggestive of an infiltrative process.  Cardiac MRI showed thickening of the mid-interventricular septum and delayed myocardial enhancement with patchy diffuse enhancement of the thickened septum and subendocardial enhancement.  Fat pad biopsy was done and Congo red staining was positive for amyloid.  Furthermore, serum and urine immunofixation was positive for IgG Lambda and Lambda light chains, respectively.   The patient was eventually discharged, however, he was re-admitted multiple times over the next 3 months for acute decompensated heart failure.  He eventually transitioned to home hospice.

Cardiac amyloidosis results from extracellular deposition of misfolded proteins called amyloid and immunoglobulin light chain amyloidosis (AL) is the most common type.  Deposition can occur in atria, ventricles, perivascular locations and in the valves.  Patient’s with cardiac amyloidosis present with progressive dyspnea and signs of right sided heart failure.  Syncope can occur from arrhythmias or autonomic dysfunction.  Symptoms often progress rapidly.  A typical ECG shows low voltage or poor R wave progression in the precordial leads.  Echocardiogram findings include thickened ventricular walls, abnormal myocardial texture, atrial dilation or valvular thickening.  Cardiac MRI displays global subendocardial late gadolinium enhancement.  Diagnosis is made by tissue biopsy that demonstrates apple-green birefringence when stained with Congo red.  It is not necessary to obtain cardiac tissue if imaging is typical for cardiac amyloidosis and amyloid can be shown in extracardiac tissue.  Once the diagnosis has been made, confirmation of AL amyloid requires testing of serum and urine immunofixation.  Bone marrow biopsy is needed to exclude other disorders associated with AL amyloidosis.  Cardiac involvement and syncope is associated with a poor prognosis.  Mean survival from the onset of heart failure is only 6 months.

Amyloidosis is a complex disorder that causes end-organ damage.  An early diagnosis made prior to cardiac involvement is important, because it may allow the patient to be able to tolerate effects of high dose chemotherapy.  Any patient found to have amyloidosis should be screened for cardiac involvement even in the absence of cardiac symptoms, because of the poorer associated prognosis. 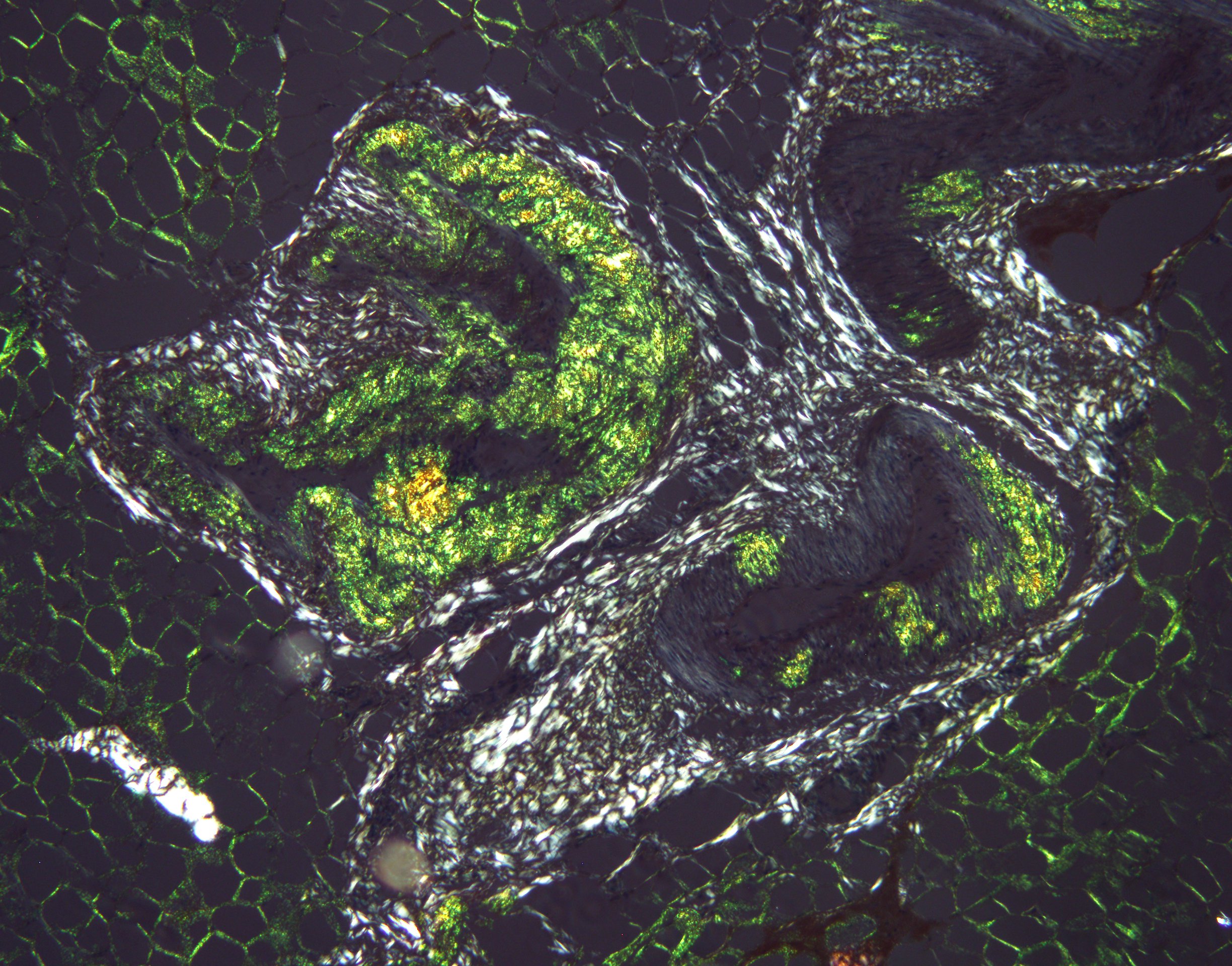