The Explorys database, an open access private cloud platform registry which integrates electronic non‐identified patient data of 13 major healthcare systems comprising 31 million patients across 120 hospitals in the United States was used. Patients diagnosed with carotid artery stenosis during 2009 and 2010 were identified using ICD‐9 codes. Patients on aspirin alone were compared to patients on both aspirin and clopidogrel for recurrent stroke and/ or TIA by 2011 and 2012.

We identified 23,050 patients with carotid artery stenosis and aspirin use alone and compared it with 8,000 patients with carotid stenosis on both aspirin and clopidogrel. The rates of occurrence of stroke and/ or TIA were not significantly different in between the two groups over a period of two years (6.8% versus 6.5%; p= 0.32). However the incidence of major and/or minor bleeding were significantly higher in the dual anti‐platelet group (14.4% versus 16.4%; p=0.003). The results are summarised in the figure 1.

Evidence for efficacy of dual antiplatelet therapy in carotid artery stenosis for secondary prevention of stroke is limited. Aspirin is the mainstay of antithrombotic medication in the secondary prevention of non‐cardioembolic stroke and TIA. Dual antiplatelet therapy has no significant benefit for long‐term secondary stroke prevention in carotid stenosis, especially aspirin and clopidogrel, while it could potentially result in greater bleeding complications. 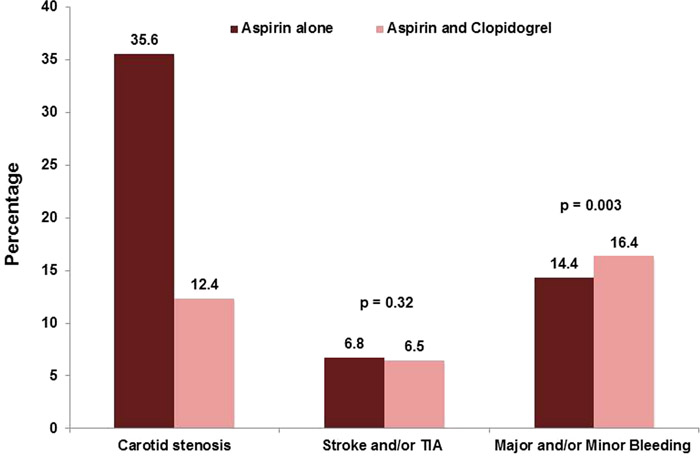