Decades-old clinical data and practice guidelines support the use of lipase over amylase in the workup and management of acute pancreatitis. Yet, laboratory testing for amylase continues to cost the Center for Medicare and Medicaid Services more than $19 million in largely avoidable charges each year. Previously hypothesized drivers of overutilization of amylase testing have included lack of awareness of the superior test characteristics of lipase; the notion that co-ordering the enzymes allows for greater diagnostic accuracy; the opinion that repeating enzymes allows for better monitoring of clinical progress; and the coupling of amylase and lipase within electronic order sets (Barbieri 2016). We sought to evaluate the relative importance of these drivers of overuse at our institution.

We queried our electronic medical record for instances of amylase and lipase orders originating from our Emergency Department (ED) or from three dedicated inpatient general medicine units over a 6-month period (May through October 2016). We simultaneously surveyed opinions regarding amylase and lipase testing among medical students, emergency room and internal medicine housestaff, and internal medicine hospitalist attendings.

There were 6613 patient encounters with associated amylase or lipase test results. Amylase and lipase were co-ordered in 1607 (24.3%) of these encounters. None of the amylase orders originating from the ED were from electronic order sets (which had been eliminated in 2014). Repeat testing was rare, occurring in only 26 visits and accounting for 6.9% (469) of the total number of tests. Finally, opinions on lab testing for acute pancreatitis differed greatly according to experience level, with more senior clinicians reporting less inclination to order amylase (Figure 1) or to repeat enzyme testing (Figure 2). Only 1 of 7 attending physicians surveyed reported discussing opinions on pancreatic enzyme testing with junior providers on their inpatient medical team.

Conclusions: The data show the rate of overutilization of amylase testing at our institution is largely similar to that of other academic medical centers (Barbieri 2016). However, electronic order sets and repeat enzyme testing make a surprisingly small contribution to overuse. By contrast, inadequate awareness of amylase and lipase test characteristics among less experienced providers – who place the preponderance of lab orders at our institution – is seemingly a significant driver of overutilization. And, despite better awareness, senior clinicians rarely report teaching junior clinicians a more value-based approach to the workup of acute pancreatitis. Taken together, the data suggest that efforts aimed at trainee education as well is intra-team communication regarding high value care will have the highest impact on reducing unnecesary amylase and lipase testing. Our ongoing work seeks to evaluate sub-specialty fellow and attending opinions on pancreatic enzyme testing, and to incorporate these findings into a system-level intervention aimed at reducing overuse. 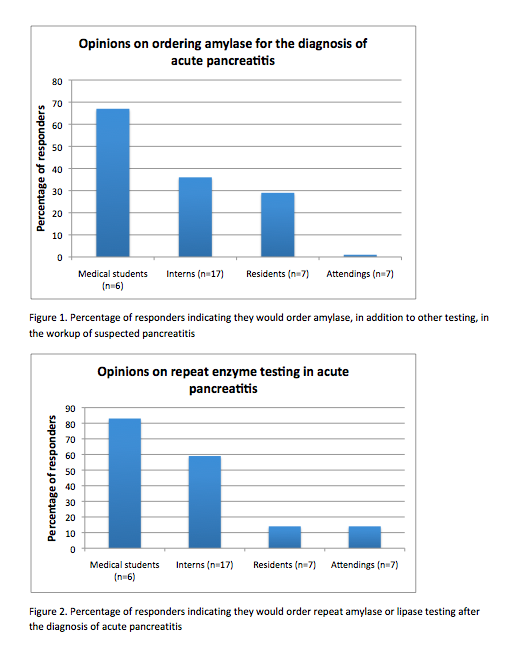