A 57‐year‐old woman presented with severe headaches. She had a medical history of morbid obesity status post Roux‐en‐Y gastric bypass surgery 7 days prior to her present illness. A VTE prophylaxis with heparin subcutaneously daily was initiated perioperatively. Her platelet count on discharge was 322,000/mm3, and prophylaxis was discontinued before discharge. Shortly after discharge, she complained of frontal headache and throbbing in nature associated with visual impairment. On examination, vital signs were stable. The patient was awake and alert but had positive left homonymous hemianopsia on visual confrontation. Otherwise the rest of neurological and other systemic examinations were within normal limits. Complete blood count showed platelet count of 140,000/mm3. CT angiography of brain disclosed multifocal nonhemorrhagic acute or subacute infarction most apparent right parietal and occipital lobe, left basal ganglia and right frontal lobe. Additionally, intraluminal thrombi occluded the right and left internal carotid arteries were seen. Cerebral venous sinus thrombosis involving the left transverse sinus, sigmoid sinus, jugular bulb and straight sinus was also noticed. Echocardiogram was normal with no visible clots or patent foramen ovale. The patient was initially started on heparin drip. On the second day, platelet count dropped to 72,000/mm3. Antibodies to heparin‐platelet factor 4 (PF4) complexes results were positive confirming the diagnosis of heparin‐induced thrombocytopenia (HIT). Argatroban infusion was initiated 3 hours after discontinuation of heparin. Her platelet count gradually increased, returning to the pretreatment level 6 days after the withdrawal of heparin. Later, warfarin was added with a target INR between 2 and 3. The patient eventually made an excellent recovery and her vision improved on follow‐up.

Heparin paradoxically has been associated with thrombosis due to HIT. This condition can be accompanied by arterial or venous thrombosis, which may occasionally have disastrous consequences in approximately 3% of patient treated with UFH and about 0.5% for low‐molecular‐weight heparin. Although HIT is typically occurs most commonly with intravenous (IV) infusion of heparin, it may also occur with subcutaneous heparin, heparin flushes and heparin‐coated catheters. Venous thrombi are more frequent than arterial thrombi (4:1 ratio) and may present in a variety of ways, from ischemia of extremities to MI, stroke, DVT and PE. HIT may also present (rarely) with cerebral venous sinus thrombosis (CSVT). According to the best of our knowledge, the simultaneous arterial and venous thrombosis in our case has never been reported in previous literatures.

Our case highlights the complexity of diagnosing 3 relatively rare conditions in the same patient and the importance of early treatment and detection of the link between combined arterial and venous thrombosis and thrombocytopenia related to heparin use. 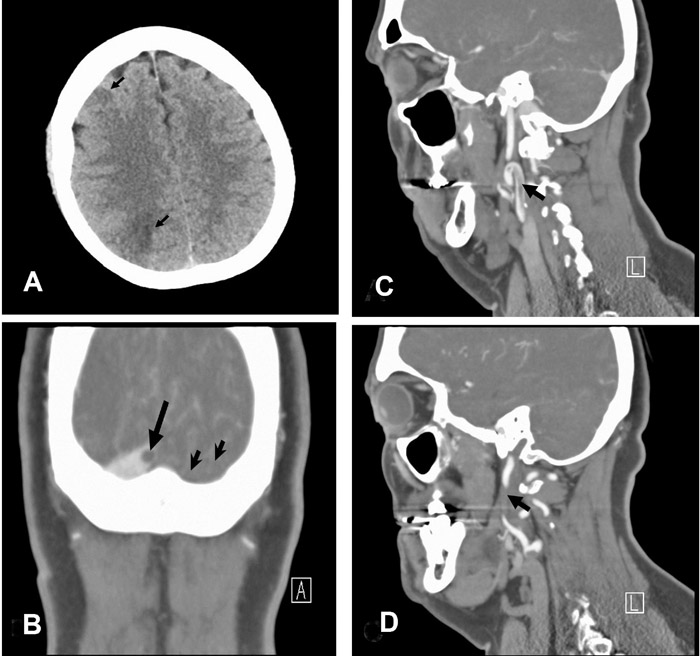 Computed tomography of the head with angiography. A (axial view): multifocal nonhemorrhagic acute or subacute infarction most apparent in right parietal and occipital lobes, right frontal lobe. B (coronal view): dural venous sinus thrombosis. There is nonopacification of the left transverse sinus, straight sinus, left sigmoid sinus, or proximal left jugular sinus because of thrombosis occlusions (small arrows). There is partial thrombus extending into the right side of the Torcula measuring 4 mm (long arrows). C and D (sagittal views): A long segment of partial intraluminal thrombus extending 45 mm is identified in the proximal left internal carotid artery at a site of severe tortuosity. This is nonocclusive with at least 60% narrowing of the luminal diameter (arrow in C). There is also a partial intraluminal thrombus identified at the origin of the left proximal internal carotid artery. This is located at the origin, likely 9 mm in length (arrow in D).