A 49‐year‐old man was admitted to our institute with a 5‐day history of profuse watery diarrhea without any associated abdominal pain or fever. His past medical history was significant for adult‐onset asthma that was poorly controlled by inhaled corticosteroid. He also had a frequent travel history to Mexico and his last trip was 3 months prior to the onset of symptoms. Physical examination was remarkable for wheezing in both lungs. Initial laboratory investigations were remarkable for a marked peripheral eosinophilia of 6570 cells/uL, although there was no previous complete blood cell count to compare, and an elevated ESR of 67 mm/hr. Chest x‐ray revealed bilateral scattered ground glass opacities with mild bilateral hilar adenopathy. Other blood chemistry tests, urinalysis, EKG and echocardiogram were unremarkable. Parasitic infestation, particularly Strongyloides stercoralis, was strongly suspected. However, extensive investigations for parasitic infestation, including direct microscopic exam for ova and parasite, stool giardia and cryptosporidium antigen, strongyloides IgG and IgM antibody, and stool culture, were all negative. He subsequently underwent colonoscopy which showed numerous serpiginous ulcers throughout the colon. Microscopic examination revealed ulcerated colonic mucosa with eosinophilic infiltration (Figure 1). Further serological investigation demonstrated a positive myeloperoxidase‐antineutrophil cytoplasmic antibody (MPO‐ANCA). The patient was finally diagnosed with Churg‐Strauss syndrome and treatment with high dose oral corticosteroid was initiated and gradually tapered. His diarrhea, shortness of breath, rash, eosinophilia and pulmonary infiltration dramatically improved after the treatment.

The most common cause of diarrhea is infection and specifically parasitic infestation if eosinophilia is present. However, several uncommon diseases can present in this similar way. In this case, the diagnosis of CSS was confirmed by colonoscopy as the eosinophilic infiltration seen on the biopsied colonic mucosa, along with the presence of asthma, peripheral eosinophilia and pulmonary infiltration, fulfilled 4 out of 6 American College of Rheumatology criteria for the diagnosis of CSS. The patient’s adult onset asthma and positive MPO‐ANCA additionally helped to confirm the diagnosis.

Gastrointestinal symptoms, though not a prominent feature or a direct ACR criterion, are also common in patients with this syndrome with a reported prevalence of 33%. In a recent case series, abdominal pain was the most common symptom which was seen in more than 90% of patients with CSS who had gastrointestinal tract involvement whereas diarrhea and gastrointestinal bleeding were seen in half of patients. Nevertheless, colonic ulcer, which was seen in this case, is infrequently described with fewer than 20 reported cases in the literatures. These ulcers are believed to be a consequence of bowel ischemia from mesenteric artery vasculitis though eosinophilic cationic protein released eosinophils might also directly insult the gastrointestinal mucosa.

Our case underscores the importance of CSS as a potential cause of diarrhea with eosinophilia after infectious etiology is excluded. A detailed history, particularly history of adult‐onset asthma, and thorough physical examination can provide a pivotal clue to the timely diagnosis and prompt treatment for this relatively uncommon syndrome 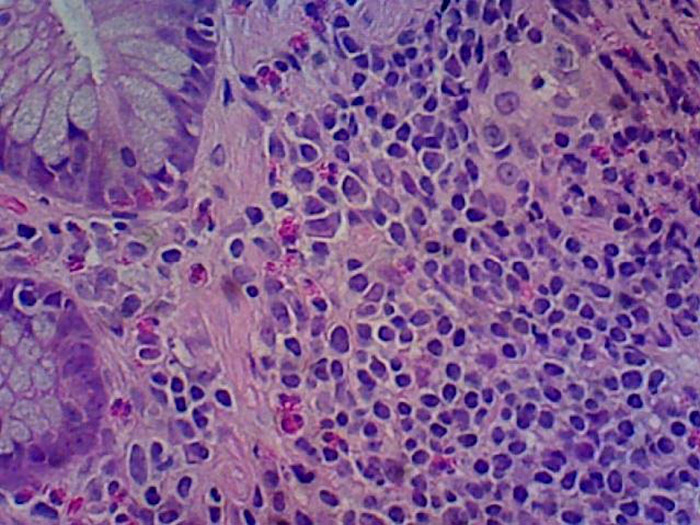