A 37 year old man with sarcoidosis was referred to a rheumatology clinic at a large tertiary level referral center for complaints of diffuse right hand and left elbow swelling with digital ulcerations. He had been diagnosed with sarcoidosis 3 years before when he presented to an outside hospital with complaints of shortness of breath. He was initially managed on Prednisone. A skin rash developed, and Plaquenil was started. He then developed arthralgias for which methotrexate and leflunomide were added with transient benefit. The swelling in his right hand had been ongoing for nearly 1 year with subsequent development of digital ulcerations. When he developed left arm involvement, methotrexate and leflunomide were stopped and a second opinion was sought. Upon evaluation, infectious etiologies were considered and he was admitted for further evaluation. Apart from the soft tissue exam findings, the patient was doing well and labs were unremarkable. He was started on broad spectrum antibiotics and underwent both skin punch biopsy and deep tissue biopsy. Pathology results showed yeast and prelim fungal cultures grew mold. He was started on voriconazole to cover dimorphic fungal organisms and final culture results confirmed histoplasmosis. A prednisone taper was eventually started.

H. capsulatum is a dimorphic fungus endemic to specific areas in North and South America as well as Africa. The most common clinical manifestation of American histoplasmosis is pulmonary disease. Patients with defects in cell‐mediated immunity are at higher risk for progression to disseminated illness. Patients often present with fever, weight loss, malaise, hepatosplenomegaly, and lymphadenopathy. American histoplasmosis rarely presents as cutaneous infection and is usually indicative of disseminated illness rather than primary infection. Skin biopsy is crucial to the diagnosis in these patients and culture has remained the diagnostic gold standard. However, clinical urgency often warrants concurrent serological assays. Urine histoplasma antigen carries a higher sensitivity over the serum antigen test: 82% vs 60%, respectively.

There has never been a report of disseminated histoplasmosis presenting as a soft tissue infection in a patient with sarcoidosis. In this case, the precipitous clinical progression was likely due to immunosuppression in the course of treatment for presumed sarcoidosis. Clinicians should have a high index of suspicion for opportunistic infections in an immunosuppressed patient, especially when symptoms are prolonged or do not improve with initial treatment. 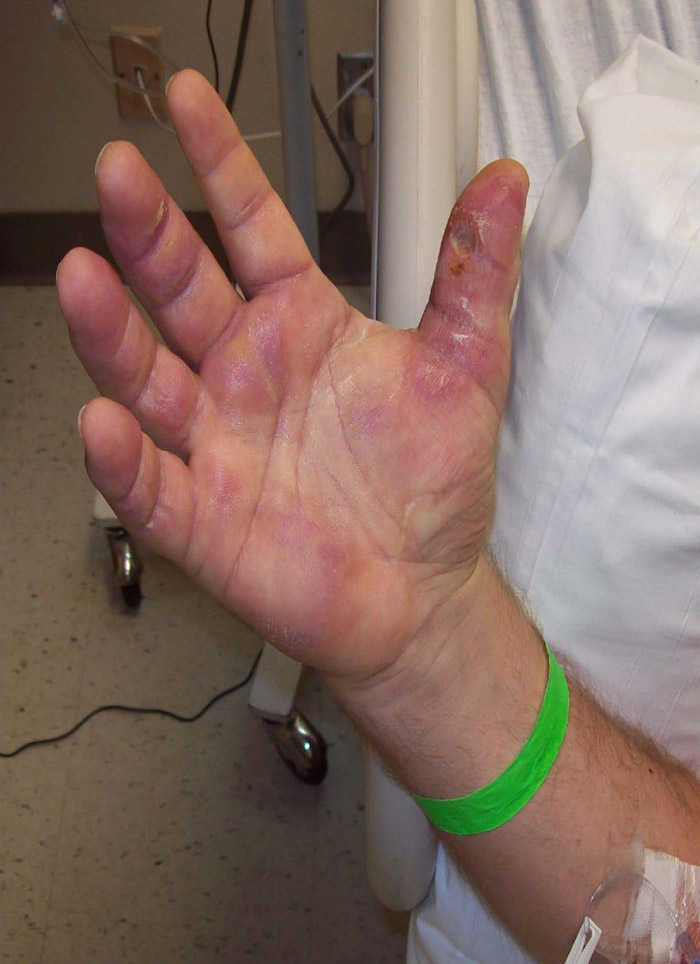