A 59‐year‐old African American woman with type 2 diabetes mellitus presented with left‐sided weakness and dysarthria for 18 hours. Her medical history was significant for hypertension, hyperlipidemia, coronary artery disease with bypass surgery and mitral valve repair, a smoking history of 20 years, and non‐adherence with her insulin and oral anti‐hyperglycemic regimen over the preceding three months. Physical examination revealed a disoriented patient with left‐facial droop, dysarthria, and 4/5 strength on the left. Emergent CT imaging of the head revealed a hyperdensity in the right caudate and lentiform nucleus without mass effect or edema. Laboratory findings included a serum glucose of 923 mg/dL, anion gap of 12 mmol/L, serum osmolality of 373 mOsm/kg, absence of urine ketones, and a hemoglobin A1c value of 18%. The patient was started on an intravenous insulin infusion for hyperosmolar hyperglycemic state. Her glucose levels subsequently returned to normal and she was transitioned back to her prior type 2 diabetes mellitus medication regimen. She underwent MR imaging of the brain with contrast that showed a T1 hyperintensity in the right caudate nucleus and right putamen consistent with diabetic striatopathy. The focal motor deficits and disorientation progressively improved and the patient was discharged home with minimal residual neurological deficits.

Diabetic striatopathy is an uncommon cause of involuntary movement disorders and localized sensory motor deficits in patients with type 2 diabetes mellitus and hyperosmolar hyperglycemic state. Patients can manifest these rare neurological symptoms when serum osmolality reaches above 320‐330 mOsm/kg and may be reversible in many cases with prompt treatment. Several published case reports have described hemichorea‐hemiballism in patients with hyperosmolar hyperglycemic state with radiological findings of a hyperdensity on CT imaging and a hyperintensity on T1‐weighted MR imaging within the striatum without mass effect. These features help to distinguish such neurological lesions from ischemic and hemorrhagic stroke. Fewer case reports describe hemiparesis in the setting of hyperosmolar hyperglycemic state with confirmed striatal involvement. Hyperviscosity and cytotoxic edema are postulated mechanisms to explain the observed T1 hyperintensity with histopathologic reports describing gliosis with abundant gemistocytes. However, the precise pathogenesis of diabetic striatopathy and its sensory motor manifestations remains unclear.

Diabetic striatopathy may present with localized sensory motor deficits and mimic an acute ischemic stroke. Hospitalists should be aware of this uncommon manifestation of hyperosmolar hyperglycemic state in patients with type 2 diabetes mellitus as therapy is directed toward the correction of the hyperglycemia. The misguided use of thrombolytics may result in serious and unnecessary complications 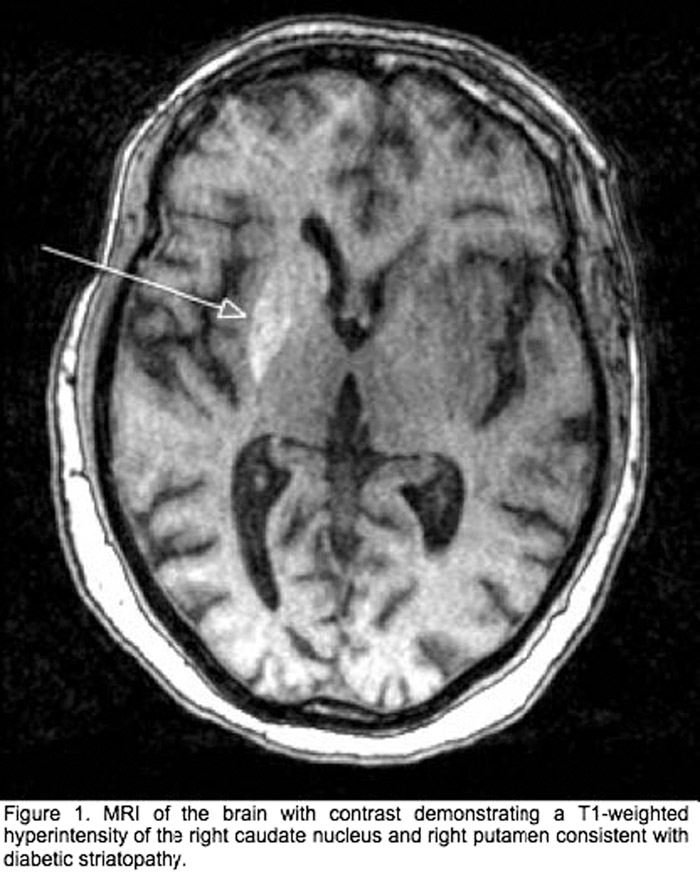