Background:
Although controversy exists regarding the effectiveness of rapid response teams (RRTs), they are an essential tool in most hospitals to address rapid patient deterioration and ideally optimize patient safety (1-5).
The utility of RRTs is dependent on the quality of the response, which in turn depends on multiple individual and institutional factors. Communication gaps and lack of collaboration among team members in emergency settings can negatively affect decision making and patient safety (6-7). The unfamiliarity of respondents with the patient’s condition, and the redundancies caused by the staggered arrival of different respondents to the patient’s location, may result in perceptible detriments in team performance. A potential way to circumvent these barriers is to provide the patient’s admission diagnosis and the reason for rapid response (RR) activation via pager, at the time of activating the RRT.

Methods:
The RR system at our institution can be activated by calling the hospital’s operator office, which sends a message to the pagers carried by the providers assigned to the RRT for that specific day.
For the purpose of this study, operators were asked to inquire about the reason for calling the RR and the patient’s admission diagnosis every time a staff member called to activate the system. The information was then included in the paging message sent to the RRT members. The telephone office algorithm also allowed callers to activate the RRT without delay if they couldn’t provide this information.
A scored questionnaire was developed to measure the impact of the intervention on residents’ experiences(table 1). The survey consisted of 5 questions and the answers were listed from the most negative to the most positive with an incremental increase in the assigned score.  A resident experience score was calculated before and after two-month intervention period. A post-survey to Hospitalists about their experience with the intervention was also conducted.

Conclusions:
Providing preliminary information about the rapid response to RRT members at the time of activating the system doesn’t have a significant effect on the respondents experience. 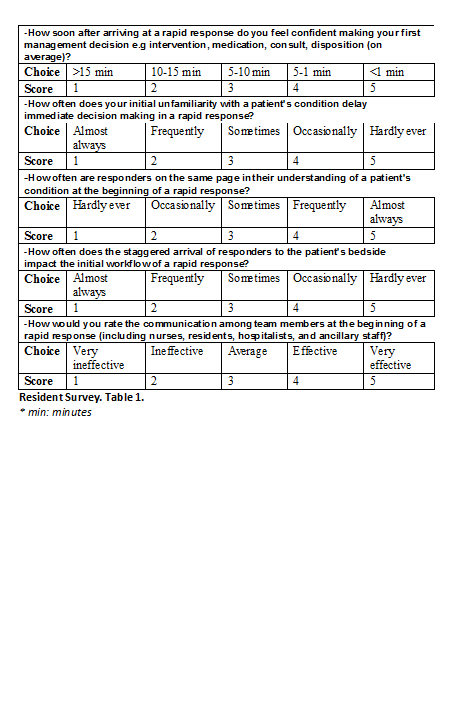