Background:  Transthoracic echocardiography (TTE) is one of the most popular tests in healthcare. Studies of Medicare beneficiaries for example have shown that each year approximately 20% undergo at least one TTE. Repeat TTE defined as TTE done within one year of a prior TTE represent 24-42% of all studies. In the present study we derive a clinical prediction model to predict unchanged repeat TTE with the goal of defining a subset of studies that are unnecessary.

Methods:  Single-center retrospective cohort study of all hospitalized patients who had a repeat TTE between October 1, 2013 and September 30, 2014. Patients with repeat TTEs within the past year were grouped into those with major changes on repeat TTE and those with mild or no change. Logistic regression was used to define variables that were independent predictors of major changes and a score was constructed based on the regression coefficients. Model performance was described by calculating a c-statistic to assess discrimination and by creating a calibration curve to assess calibration. Internal validation was performed using bootstrapping.

Results:  During the study period 601 patients had at least one inpatient TTE. Of these 601 patients, 211 (35%) had a prior TTE within the past year. Of those 211 patients, 67 (32%) had no change, 66 (31%) had minor changes and 78 (37%) had major changes. On logistic regression, 5 variables were independent predictors of major new TTE changes, including history of intervening acute coronary syndrome, intervening cardiothoracic surgery, major new EKG changes, prior valve disease, and prior chronic kidney disease. Using the β-coefficient for each of these variables we defined a clinical prediction model which we named the CAVES score.  The prevalence of major TTE change for the full cohort was 35%. For the group with a CAVES score of -1 that probability was only 5.6%, for the group with a score of 0, the probability was 17.7%, and for the group with a score ≥1 the probability was 55.3%.The bootstrap corrected c-statistic for the model was 0.78 (95% CI, 0.72-0.85) indicating good discrimination. 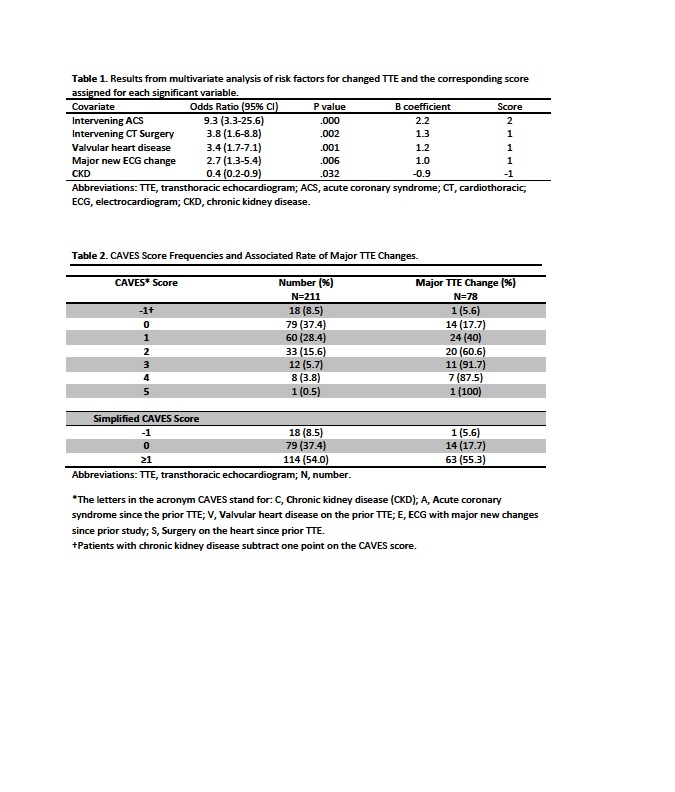