The prevalence of congestive heart failure (CHF) in the United States has been on the rise over the last decade. This is likely because of the standardized management of hospitalized patients with CHF decompensation, allowing patients with CHF to live longer. These patients are known to posses increased risk of developing deep vein thrombosis (DVT). We analyzed data from the Nationwide Inpatient Sample (NIS) to examine the impact of DVT on mortality in patients hospitalized with CHF.

We conducted a retrospective analysis using the NIS, a database developed as part of the Healthcare Cost and Utilization Project sponsored by the federal Agency for Healthcare Research and Quality (AHRQ) from 1998 to 2007. NIS is the largest all‐payer inpatient care database in the United States, which contains data from approximately 8 million hospital stays per year. Adult patients (>18 years) with CHF during the 10‐year period were identified using ICD‐9 codes. The prevalence of DVT in this population was calculated. Characteristics of patients with and without DVT were compared, utilizing data over a 10‐year period starting with the index admission. Chi‐square, median, and Student t tests were used as appropriate. Multivariate regression for overall mortality and length of stay (LOS) was conducted using logistic and linear models, respectively. The analysis was controlled for sex, insurance status, and comorbidities using the Charlson comorbidity index. 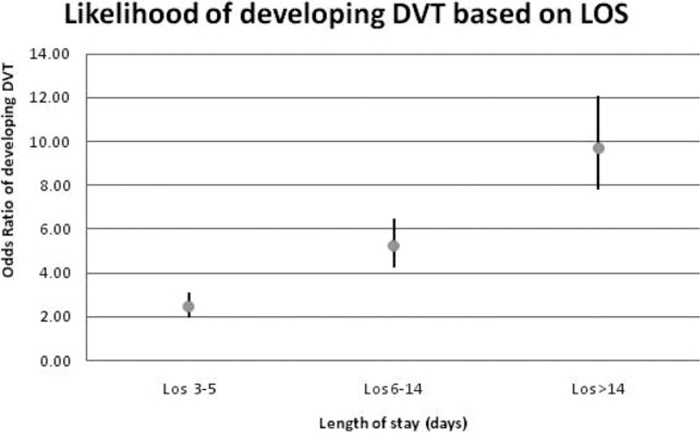