A 25‐year‐old Filipino female presented after being brought To the emergency department by a friend who noticed her “very abnormal behavior.” The patient was found wandering outdoors and was unaware of her surroundings and the month and year and could not recall recent events. On presentation the patient was afebrile, and her vital signs were stable. She was unable to provide any reliable history and was unable to follow most commands during the exam. She did not exhibit any focal deficits but did have markedly abnormal cognition. Her MMSE revealed a score of 11/30, and it was necessary to repeal questions several times before receiving any response. Her workup revealed a WBC of 21,000. Her chem‐12, toxicology screen, HIV, and RPR were normal. An MRI revealed a T2/FLAIR signal hyperinlensity involving the white matter of the frontal lobes bilaterally without associated mass effect or enhancement. These findings suggested PML, acute disseminated encephalomyelitis (ADEM), vasculitis, encephalitis related to CMV or HIV, or drug‐related leukoencephalopalhy. On further questioning of family members it was discovered that the patient was recently diagnosed with ADEM at an outside facility. She had responded to treatment with high‐dose steroids with a remarkable recovery in cognitive function. Following her release the patient failed to take her high‐dose steroids as prescribed. We were likely witnessing a relapse of her disease. Neurology was subsequently consulted and recommended beginning high‐dose steroids and IVIG. In a matter of 24 hours after the trealment was started, the patient's MMSE score improved significantly. 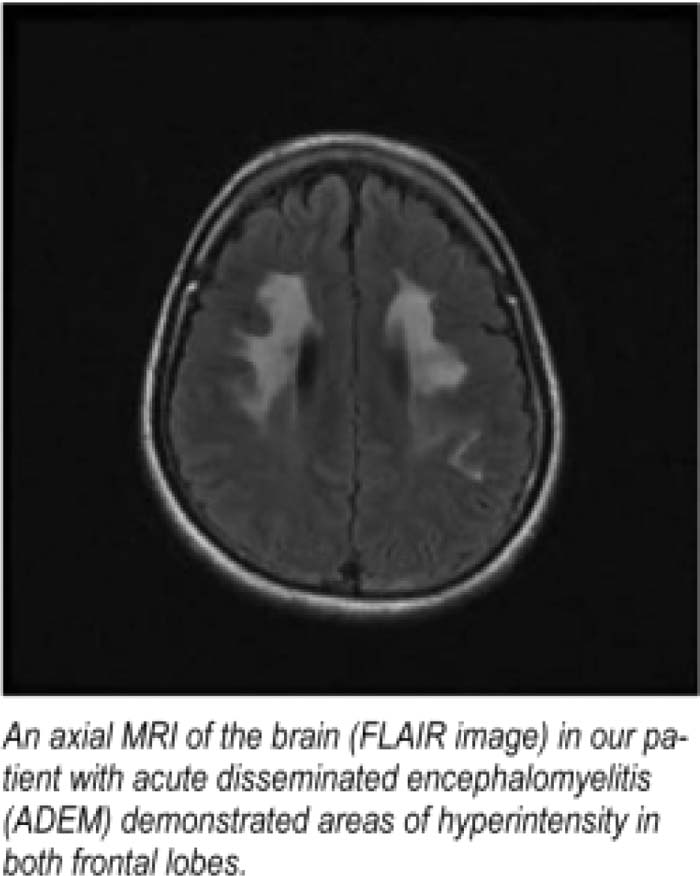 Acute disseminated encephalomyelitis (ADEM) is a rare inflammatory demyelinating disorder more commonly seen during childhood. Approximately 75% of cases are preceded by a viral or bacterial infection in the form of an upper respiratory infection which is believed to be the trigger for an autoimmune response Specifically, myelin autoantigens, such as myelin basic protein, share antigenic determinants with those of an infecting pathogen. A small number of cases are thought to occur postvaccinial. Typical neurologic symptoms including fever, headache, vomiting, and meningismus appear 4–13 days after the infection or vaccination. Rapidly developing encephalopathy is a characteristic feature. In fact, it is common for new neurologic symptoms such as cerebellar ataxia and cranial neuropathies to develop while a patient is hospitalized and receiving treatment. The severe phase of ADEM generally lasts from 2 to 4 weeks, with most patients recovering from the acute illness with few neurological sequelae. Between 60% and 90% of patients recover fully with steroids. IVIG and plasma exchange may be effective as rescue therapy in those not responding to steroids. 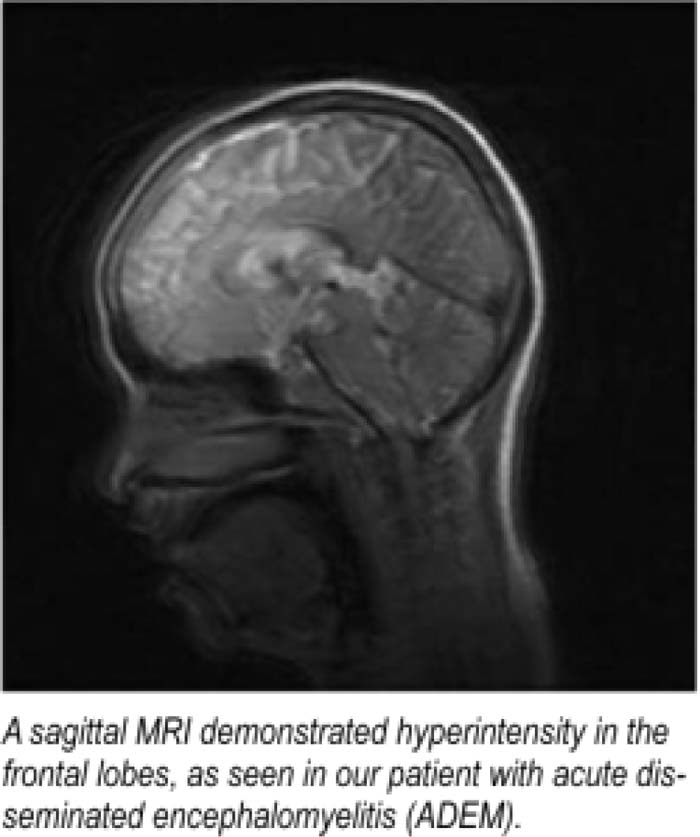