A 25‐year‐old woman presented to the ED with a 3‐month history of worsening abdominal distention. She had previously been diagnosed with “belly fluid” and was treated with Lasix. She denied any weight loss, cough, fevers, night sweats, or travel. Afebrile on presentation, her exam was significant for abdominal ascites without masses, organomegaly, and lymphadenopathy. CT of her abdomen noted prominent ovaries, a possible adnexal mass, abdominal lymphadenopathy, and omental thickening (Fig. 1). Her peritoneal fluid analysis was significant for a serum albumin ascites gradient (SAAG) of less than 1.1 with no malignant cells. The patient refused a PPD test because of a prior “allergic response” that caused her “whole body” to swell. Thus, a TB quantiferon test was ordered and was positive. Because we were concerned for TB, a chest CT was ordered showing innumerable “tree in bud” apical nodules. AFB sputum cultures remained negative for several weeks. Unable to obtain a definitive diagnosis from sputum stains and cultures, a diagnostic laparoscopy was performed to obtain biopsies of the omentum and peritoneal lining. Biopsy results revealed caseating granulomas that were acid‐fast positive, so the patient was started on RIPE therapy and did well. Weeks later, tissue and sputum AFB cultures grew Mycobacterium tuberculosis. 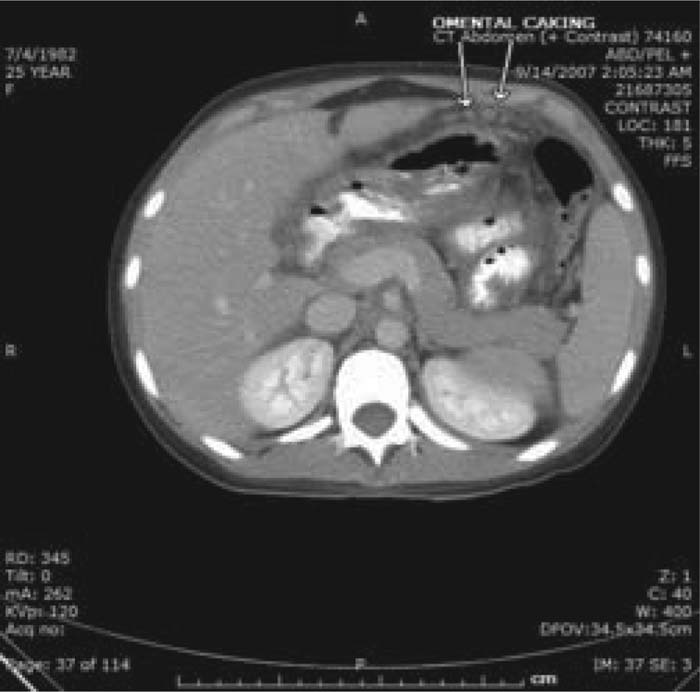 We describe a case of miliary TB of the lung and peritoneal lining with ascites as the only presenting symptom. Because a diagnosis of TB cannot be confirmed by a positive PPD or TB quantiferon test (positive results only confirm exposure to TB but not active disease), a tissue diagnosis, which is the gold standard for diagnosis of tuberculous peritonitis, was sought prior to committing the patient to 6 months of RIPE therapy.

Workup of new‐onset ascites should include a diagnostic paracentesis to document whether the SAAG is consistent with portal or nonportal hypertension. Documentation of low SAAG ascites mandates a workup for an underlying cause. Because of the significant morbidity and mortality associated with TB, reports of emerging resistance and the public health hazard it poses if not appropriately isolated and treated, a definitive diagnosis should be sought in patients with a high pretest probability because sputum cultures may not grow for several weeks.