Background: Hospital medicine has significantly grown over the last two decades with increasing focus on providing improved quality of care while also reducing cost.  A recent focus has been on transitions of care and handoffs, which have been identified by The Joint Commission as a potential pitfall for miscommunication and area of increased risk for patients.  Studies have been conducted to identify gaps and improve transitions of care from the inpatient setting to outpatient providers.  However, there have been few studies that have examined the impact of the discontinuity of providers within the hospital on measures of mortality, length of stay (LOS), and readmissions.

This study implemented a novel staffing model in a traditional 7 on 7 off shift-based staffing system that focused on continuity of care at an urban academic nonteaching hospitalist service.

Methods: Our study was a retrospective cohort in which matching 6 months of patient data were compared pre and post implementation of a new staffing model in January 2016.  The model changed from a drip system of admissions with dedicated rounders and dedicated admitters to one where rounding hospitalists admitted their own patients for daytime hours on the first four days of their week.  They did not admit and focused on discharging patients on their last three days.   Total hospitalists involved in care were assessed as a measure of handoffs.  Outcome measures included mortality, length of stay, and 30-day readmission rate.

Results:   We identified 2,102 patients admitted to the hospital medicine service from January 1st 2015 to June 30th 2015 and 1,870 patients admitted during the same time in 2016.   Patient characteristics, including gender, age, and total number of diagnoses, were found to be similar between years.  The number of hospitalists rounding on patients admitted before staffing model change was on average 2.76 compared to 2.19 in the intervention group [p < 0.001].   Average length of stay was significantly reduced by over a half day from 6.34 days in 2015 compared to 5.7 days in 2016 [p=0.002].

Of patients admitted prior to intervention, 46.52% had just one rounder during hospital course while 57% had one rounder in the intervention group [p < 0.001].  In 2016, 23% of patients had one provider from admission to discharge compared to none in 2015 [p < 0.001].  There was no difference in mortality between groups; however, there was a direct relationship between the number of hospitalists and death in both groups with an increase odds ratio of 1.37 with each additional hospitalist added to the patient’s care [p < 0.001]. Similarly, the odds of death increased 1.15 times with each additional diagnosis on admission [p < 0.001].  There was no statistical difference in 30-day readmissions between years.

Conclusions:   Improvement in hospitalist continuity significantly decreased patient LOS in this novel seven-day staffing model.  There was not a significant difference in mortality or 30-day readmission rate between groups, but there were increased odds of death with additional hospitalist handoffs independent of year.  Implementing a new staffing model focusing on continuity is an inexpensive and potentially cost effective intervention for a hospitalist service.   Future considerations include how improved continuity impacts cost, patient satisfaction as well as physician satisfaction. 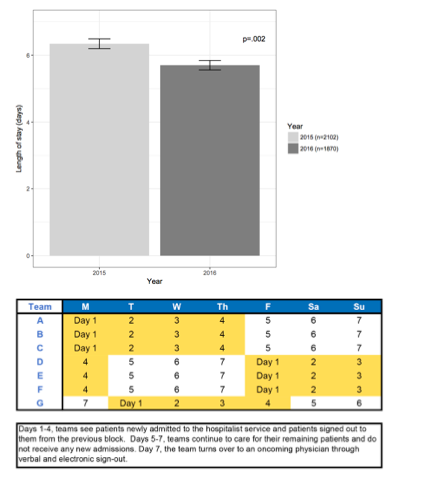