A 43 year-old man presented to emergency room with 3 days of altered mental status and aphasia. A friend checked on him and called 911 after 3 consecutive days of non response to his phone calls. He was an immigrant from Burkina Faso. Due to his aphasia most history was ellicited from his friend, who endorsed that patient was otherwise healthy with PMH of hypertension. Apparently he did not have any primary doctor and was not on any medications. On exam he had right facial droop with right hemiparesis. He also had dysarthria, anomic aphasia and lower extremity ataxia. An acute intracranial hemorrhage in Left basal ganglia was revealed on CT brain. Extensive symmetric calcification within the bilateral basal ganglia was also appreciated. His initial management consisted of nicardipine drip for control of BP with close neurologic monitoring in ICU. His labs indicated a potassium of 2.6, sodium of 146 and a creatinine of 1.9. Potassium was replaced initially by IV route. It improved modestly and then continued to drop to the range of 2.2 to 3.0. Mg level was within normal limits. On MRI brain prominent symmetric calcification was confirmed. In addition there were multiple small micro hemorrhages and several lacunar infarctions. Further work up for hypertension was pursued which indicated aldosterone renin ratio elevated to >170. A confirmatory test was done with 2l Saline loading and aldosterone failed to suppress adequately. Meanwhile patient required large doses of daily potassium chloride approx 220 meq to maintain his potassium levels. Finally a MRI of his adrenals revealed a 12 mm left adrenal adenoma. Surgery was consulted for an adrenalectomy. Due to compromised functional status after the stroke, it was decided that he undergo elective adrenalectomy after completing Rehab. The patient’s primary hyperaldosteronism was managed with spironolactone which was titrated to 100 mg of spironolactone daily at the time of his discharge from the Inpatient Rehab. Patient was requiring intermittent potassium supplementation but with spironolactone his potassium requirement had been suppressed.

Discussion: Primary Aldosteronism is the most frequent cause of secondary hypertension. Patients display increased risk of cardiovascular and cerebrovascular events compared with essential hypertension with similar BP and risk profiles. Our case illustrates a rare clinical scenario where adrenal adenoma was identified as etiology for patients presentation with hemorrhagic stroke, hypertensive emergency and end organ damage. A low potassium triggered a work up which confirmed our concern for Primary Aldosteronism. In patients who present with ischemic or hemarrhagic stroke its important to recognise this entity as an important etiology in appropriate clinical setting and work up undertaken, otherwise the patients may be lost to follow up with potential for future catastrophic cerebrovascular events.

Conclusions: Previous studies on animal models show that aldosterone is responsible for increased perivascular inflammation, fibrosis and endothelial dysfunction which might be responsible for pathogenesis of stroke independent of BP. Our case confirms the importance of early diagnosis when suspicion exists for primary aldosteronism. The excessive morbidity from stroke and other cardiovascular effects can be largely or completely abolished by the administration of a mineralocorticoid receptor antagonist and or adrenalectomy. 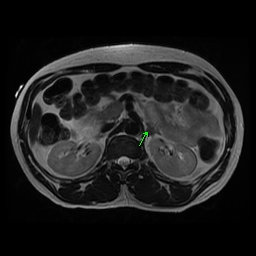