Case Presentation: A 67 year- old man presented with three weeks of progressively worsening painful ulcers in bilateral lower extremities and fingers. The lesions started as numerous erythematous lesions on his legs and fingers five months ago that subsequently turned into inflamed blisters and ultimately evolved into painful crusted ulcers. He was treated with antibiotics and dermazin cream for presumed diagnosis of pyoderma gangrenosum but skin lesions failed to improve. There were tender, punched out and stellate necrotic ulcerations on bilateral lower extremities and dorsolateral aspect of hands.  Lesions transitioned from foul odorous deep chronic ulcers with overhanging erythematous borders on ankles and shins into shallow ulcers and crusted papules at the proximal lower legs and knees and resolving by the mid-thigh (Figure 1). Oropharynx and conjunctivae were without lesions. Laboratory evaluation revealed leukocytosis of 20000 cells per cubic millimeters, 90 percent neutrophils, positive serum c-ANCA (cytoplasmic antinuclear cytoplasmic antibody) and ANA (anti-nuclear antibody). Platelet count, serum creatinine and blood urea nitrogen were normal. Serum cold agglutinins and hypercoagulable work-up were negative. Skin biopsy showed intravascular thrombi and necrotizing vasculitis. Upon further questioning, he revealed that he had been smoking cocaine for the last 6 months. Patient underwent extensive surgical debridement with future plan for skin graft.

Discussion: Levamisole, a medication that used to treat conditions like Rheumatoid Arthritis was banned in the United States due to its side effects of agranulocytosis and cutaneous vasculitis. Although levamisole-induced vasculitis cases decreased after its discontinuation, since 2003 the incidence increased owing to its use as an adulterant in cocaine. Approximately 70% of the cocaine in the United States contains levamisole and reported cases of levamisole-induced vasculitis are exclusively in cocaine users. Wounds as seen in the figure and pathology as described above with positive serum ANCA (perinuclear ANCA more frequent than cytoplasmic ANCA) are characteristic features of this condition. One significant phenomenon is the alarming rate of recurrence of symptoms after re-exposure to cocaine.  Differential diagnoses include ANCA-associated vasculitides and cryoglobulinemia. Majority of the cases resolve after cocaine cessation. Use of corticosteroids has not shown definite benefits. Infected wounds in levamisole-induced vasculitis requiring surgical debridement, skin grafting and even amputations have been reported.

Conclusions: The importance of accurately identifying levamisole-induced vasculitis is critical as discontinuing levamisole exposure by cocaine use cessation is the single most important step in treatment.  More importantly correct identification of the cause prevents unnecessary and potentially dangerous use of immunosuppressive therapy used in other types of vasculitis syndromes. 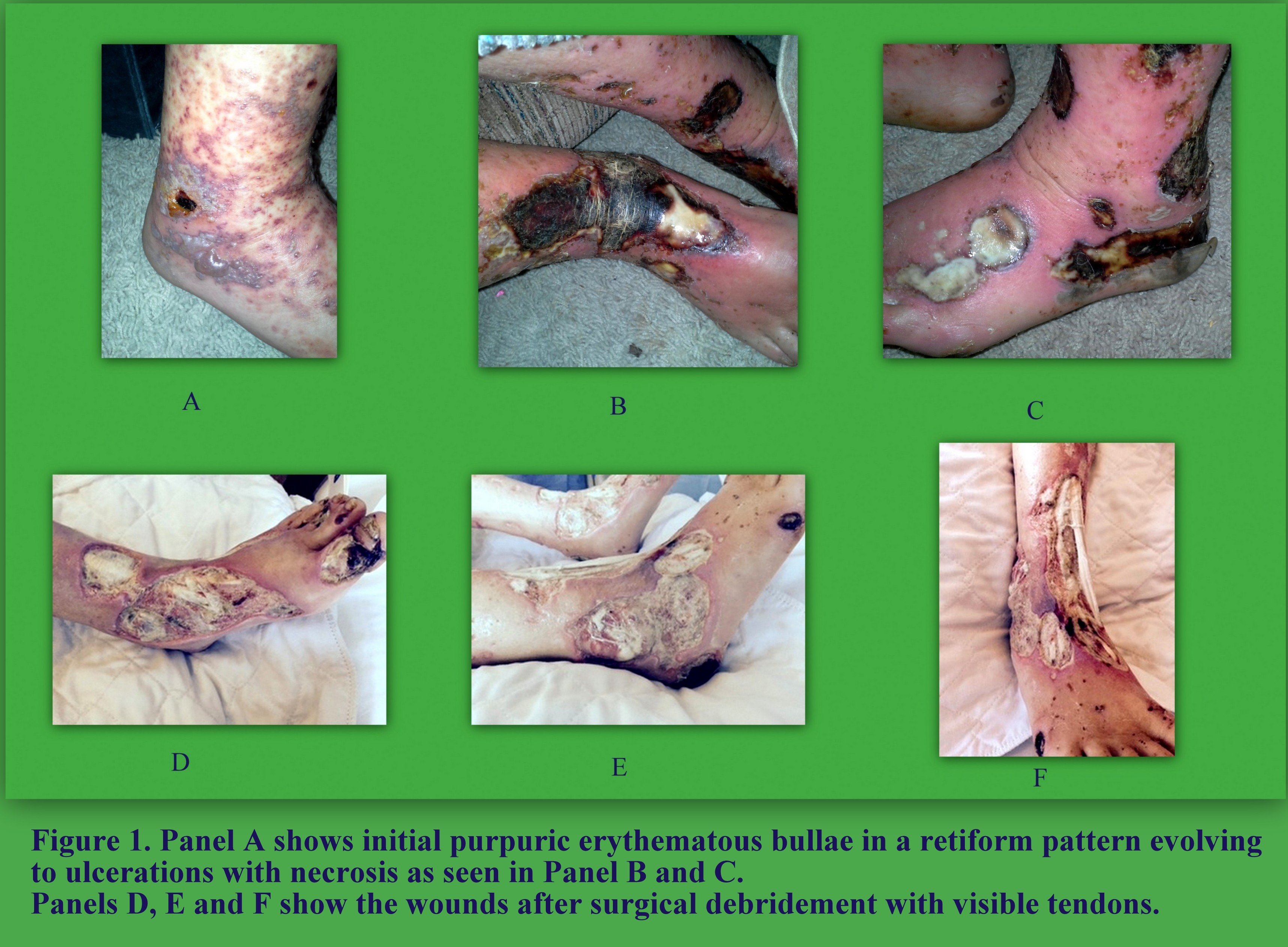