A healthy 65‐year‐old man with history of high‐risk sexual activity presented to the ED with 5 days of oligoarthritis. The patient was in Florida 1 week prior to admission, when he developed URI symptoms. The day prior to admission, he developed pain and swelling in his left foot and right wrist, subjective fever, and erythema on his neck and back. He denied headache, neck stiffness, or photophobia. On admission, his exam was remarkable for an inflamed right wrist and left foot, both with limited range of motion. In addition, his left thigh was erythematous and edematous and exhibited a discrete, W‐shaped ecchymotic lesion. He had rales at the right base. Notable labs on admission were a WBC of 4000, CRP 48.6, ESR 32, Cr 1.7, AST 49, and ALT 68. A chest CT revealed a right basilar infiltrate. He received 1 dose of vancomycin and Unasyn in the ED. On day 2 of his hospitalization, he was started on ceftriaxone and imipenem after 1of 3 blood cultures grew gram‐negative coccobacilli. The organism was identified as Neisseria meningitidis. The patient underwent I&D of his affected ankle and wrist joints; however, no WBCs or organisms were identified on analysis. On day 4, his left knee and right elbow became inflamed. With the addition of steroids, the inflammation resolved. 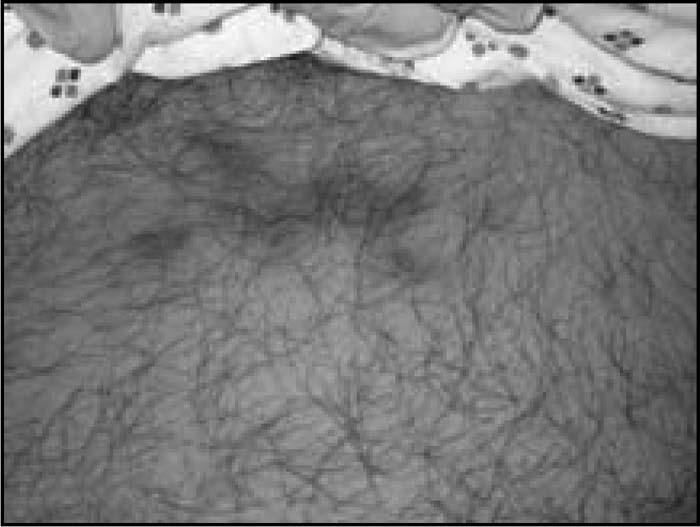 N. meningitidis is a leading cause of bacterial meningitis in the United States, but disseminated meningococcemia may present unpredictably without CNS involvement. Meningococcus typically presents in the winter with a prodromal pharyngitis. Chronic meningococcemia may manifest with oligoarthritis, tenosynovitis, and hemorrhagic cutaneous lesions. Acute arthritis‐dermatitis syndrome is increasingly caused by N. meningitidis; however, the arthritis is usually immune mediated rather than purulent. Furthermore, purulent arthritis is usually monarticular, and our patient had polyarthritis. Meningococcal pneumonia is not common but is usually bilateral and preceded by pharyngitis. We can deduce but not prove that our patient had meningococcal pneumonia.

Despite the CNS predilection of N. meningitides, it can have many manifestations. Although our patient was HIV negative, it is possible he had an underlying terminal complement deficiency. His normal CH50 in the setting of an acute illness may support this. Furthermore, given the infectious and inflammatory nature of our patient's illness, the concurrent administration of steroids and antibiotics was warranted.