Chronic Obstructive Pulmonary Disease (COPD) exacerbation is a common clinical condition that requires hospitalization. However, identifying which patients would be appropriate for a short stay in an observation unit versus an inpatient admission has not been well established. The aim of this study was to determine which patient characteristics and clinical findings are associated with hospitalizations of < 48 hours, and thus can be used to guide referral to the observation unit.

The study is based on a retrospective review of the medical records of patients who were primarily hospitalized for acute exacerbation of COPD to an 805‐bed teaching hospital. Patients were excluded if they were admitted directly to the intensive care unit. Demographic data, baseline history and clinical findings in the emergency department and upon admission were abstracted. The occurrence of all‐cause death, readmission and revisit to the emergency department within 30 days were also recorded. The clinical characteristics of patients who stayed < 48 hours were compared to those who stayed longer using independent T‐tests for continuous variables.

Other than a larger improvement in respiratory rate from the initial presentation in the emergency department to the point of hospitalization, it is difficult to identify which patients could be safely discharged in less than 48 hours and would be appropriate for the observation unit. 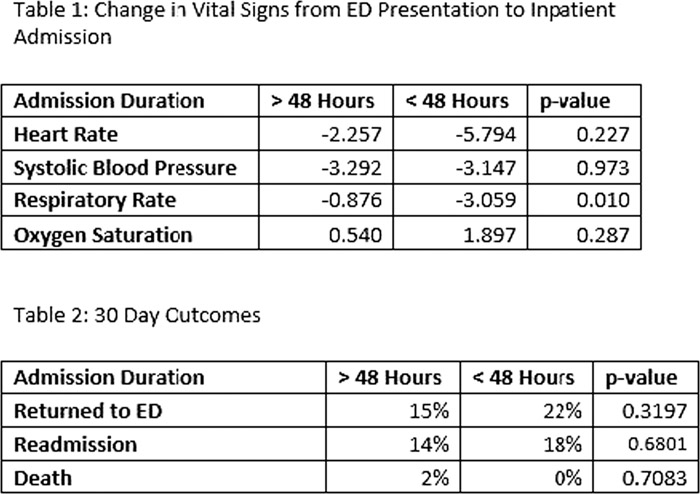