Infective endocarditis (IE) has been recognized as a complication of hemodialysis (HD) since 1966. The incidence is estimated to be 308 per 100.000 patients year, which is 50‐ to 180‐fold higher than the 1.7‐6.2 cases per 100,000 patient‐years reported for the general population. Risk factors for the development of IE are frequent episodes of bacteremia related to vascular access and relative poor immune function.

Echocardiographically positive cases of IE meeting the Modified Duke Criteria were identified over a 3‐year period (July 2006‐July 2009). Patients were divided into 2 groups, hemodialysis and nonhemodialysis. Medical records were reviewed. Associate illnesses, clinical characteristics, and microbiological and echocardiographic findings as well as outcome were noled. 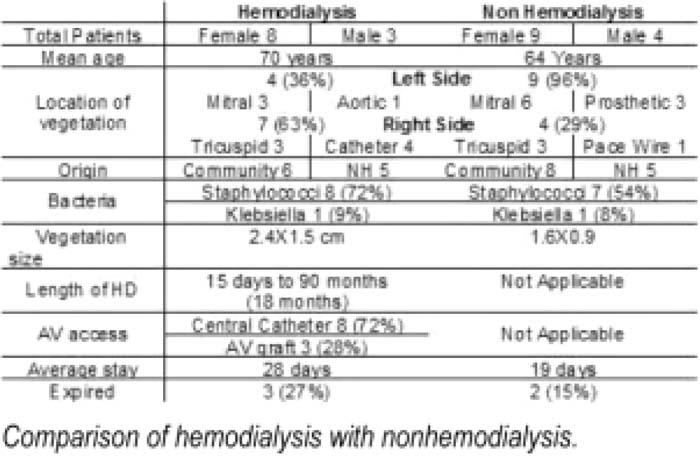 Twenty‐four patients were diagnosed with IE. Eleven were on HD (46%), and 13 were non‐HD (54%). Fever and leukocytosis were the most common presenting symptoms. Left ventricular hypertrophy was noted on echocardiography in 55% HD patients followed by tricuspid regurgitation (45%), pericardiaI effusion (45%), and hypokinesia (27%). Comorbidities in HD patients were hypertension (100%), diabetes (45%), congestive heart failure (36%), cancer (18%), history of methiciIlin‐nesistant Staphylococcus aureus (MRSA) bacteremia (27%), permanent pacemaker (11%), and atrial fibrillation (11%).

IE remains predominantly a disease of the elderly in both HD and non‐HD patients. Females outnumbered males in both groups, contrary to the historic control data. In our population, IE in the HD group was most commonly right sided (63%), involving the tricuspid (27%) and catheter (36%), contrary to observation by others. In the non‐HD population, left‐sided IE was seen more frequently (69%). The access used for HD associated with IE in 72% cases was the central catheter. Staphylococci species were the most common isolates in both groups.