A 66 year old male with a history of IV drug abuse, comes to our hospital to be evaluated due to diarrhea that started 2 months ago; 3-5 depositions a day, watery in consistency no blood or mucus, associated with epigastric abdominal pain described as “burning” in nature, 7/10 intensity without radiation and a 50 pound weight loss. Denied fever, chills, shortness of breath, nausea or vomiting; symptoms were non consistently worsened with food ingestion and did not improve with OTC medication for diarrhea. PMH was significant for HCV diagnosed 1 month ago. On physical exam the abdomen showed a prominent liver edge 5cm below the costal margin non tender, non distended without ascites. Laboratory work-up upon admission showed metabolic acidosis, acute kidney injury, no electrolyte disturbances and an elevated TSH. Esophagogastroduodenoscpy done the day after admission showed an esophagus that was normal and a friable mass in the antrum of the stomach that bled on contact, cold forceps biopsy was taken. A colonoscopy was also performed, with unremarkable findings; random biopsies taken. Pathology reports a tissue that on red congo stain has apple-green birefringence indicative of amyloid fibrils in both colonic and gastric samples. The deposition of amyloid fibrils in other organs were sought out with negative results; thus giving the impression of single system involvement.

Amyloidois is the term for a group of protein folding disorders characterized by the extracellular deposition of insoluble polymeric protein fibrils in tissues and organs. Amyloidosis is commonly systemic, occasionally organ-limited, and rarely a solitary localized mass. This latter presentation is commonly referred to as tumoral amyloidosis. Although reports exists of these often called “amyloidomas” showing up in almost every tissue/organ, the GI tract has a prevalence that is not well document making it an outstanding diagnostic challenge.

Gastrointestinal amyloidosis causes severe malabsorption due to the deposition of the protein fibrils, explaining the patient’s chronic diarrhea and significant weight loss.  Since patient’s malabsorption caused wasting and malnourishment, total parenteral nutrition was indicated while the patient received chemotherapy for the treatment of amyloidosis.

This case illustrates that there is an important risk of misunderstanding and diagnosis delay of patients that present with malabsortion. Even if the clinical symptoms are not obvious upon initial presentation, the hypothesis of gastrointestinal amyloidosis should be considered among the possible diagnosis of patients with chronic diarrhea and weight loss. In doing so quality of life as well as morbidity improvement should be evident 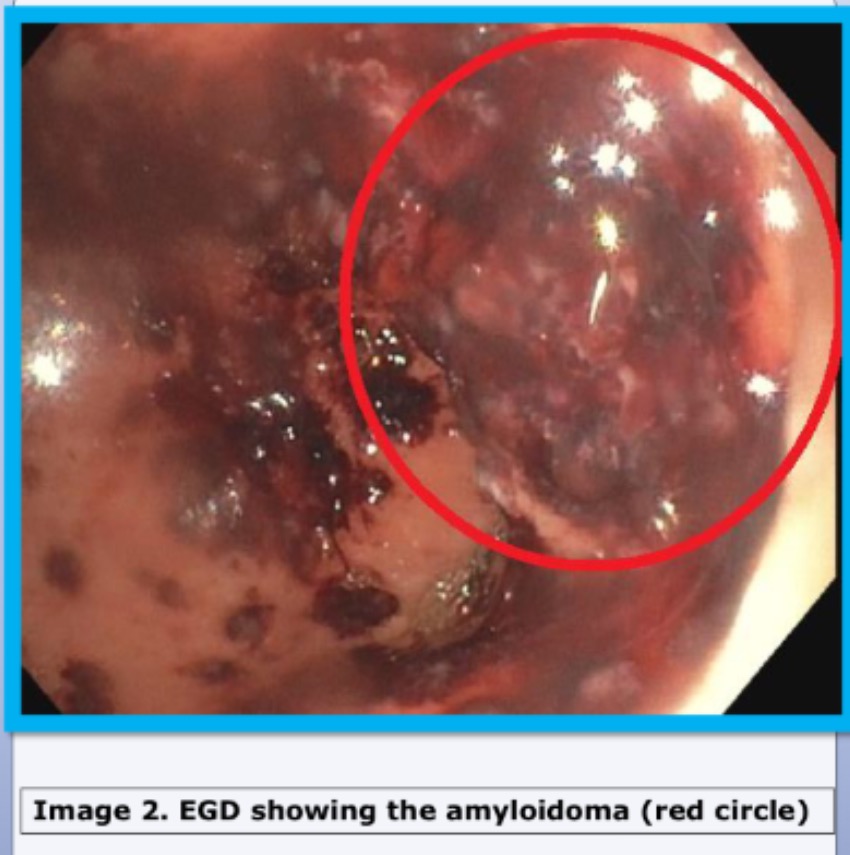