Severe aortic stenosis (SAS) had been identified as being at elevated risk for non-cardiac surgery. However, two reports demonstrated that SAS did not increase mortality of intermediate to high risk non-cardiac surgery. The European Society of Cardiology guideline states non-cardiac surgery of low to intermediate risk can be safely performed among patients with SAS. Fall and fractures such as of hip or wrist as well as vertebral compression fractures are common among elderly people. For hip fractures, prompt surgery has been strongly recommended to improve prognosis, but surgery is sometimes delayed for other clinical reason including SAS incidentally found by preoperative evaluation. Characteristics and outcomes of patients with hip fracture, complicated with SAS have not yet been investigated yet in Japan.

Patients were included if they were hospitalized in orthopedic surgery unit of our hospital with hip fractures and SAS between April 2012 to August 2016. SAS was defined as aortic valve area ≤1 cm2. These patients were identified by retrospective chart review. Age, sex, comorbidities, symptoms by SAS (angina, heart failure and syncope) and days before surgery as well as outcomes (intraoperative and in-hospital mortality and mobility on discharge) were obtained.

We identified 16 patients. Mean age was 87.4 years (standard deviation, SD: 4.5) and 15 patients (94%) were female. All of them were ambulatory before the fracture. Fourteen patients underwent hip surgery without intraoperative death. One patient undergone balloon aortic valvotomy, followed by hip surgical treatment 13 days after fracture. He had never become ambulatory and died from pneumonia 30 days after the surgery. The other 13 patients underwent hip surgery 1-13 days after fracture (median; 4 days). No intraoperative death occurred although they did not have treatment of SAS. Four patients had symptoms by SAS perioperatively. Of the 13, 10 patients (77%) became ambulatory again. Nobody died during hospitalization.

No patients with SAS died during hip fracture surgery, as was previously reported for general surgery. Patients without aortic valve procedure underwent hip surgery earlier than patients who had aortic valve procedure before hip surgery and 77% of those who did not have aortic valve treatment became ambulatory. As shown in this study, even when SAS exists, hip fracture can be safely performed and useful for improving mobility. Physicians should be aware of the importance of prompt surgery for hip fracture and should not consume time for the preoperative evaluation and treatment of SAS, especially when they are asymptomatic. 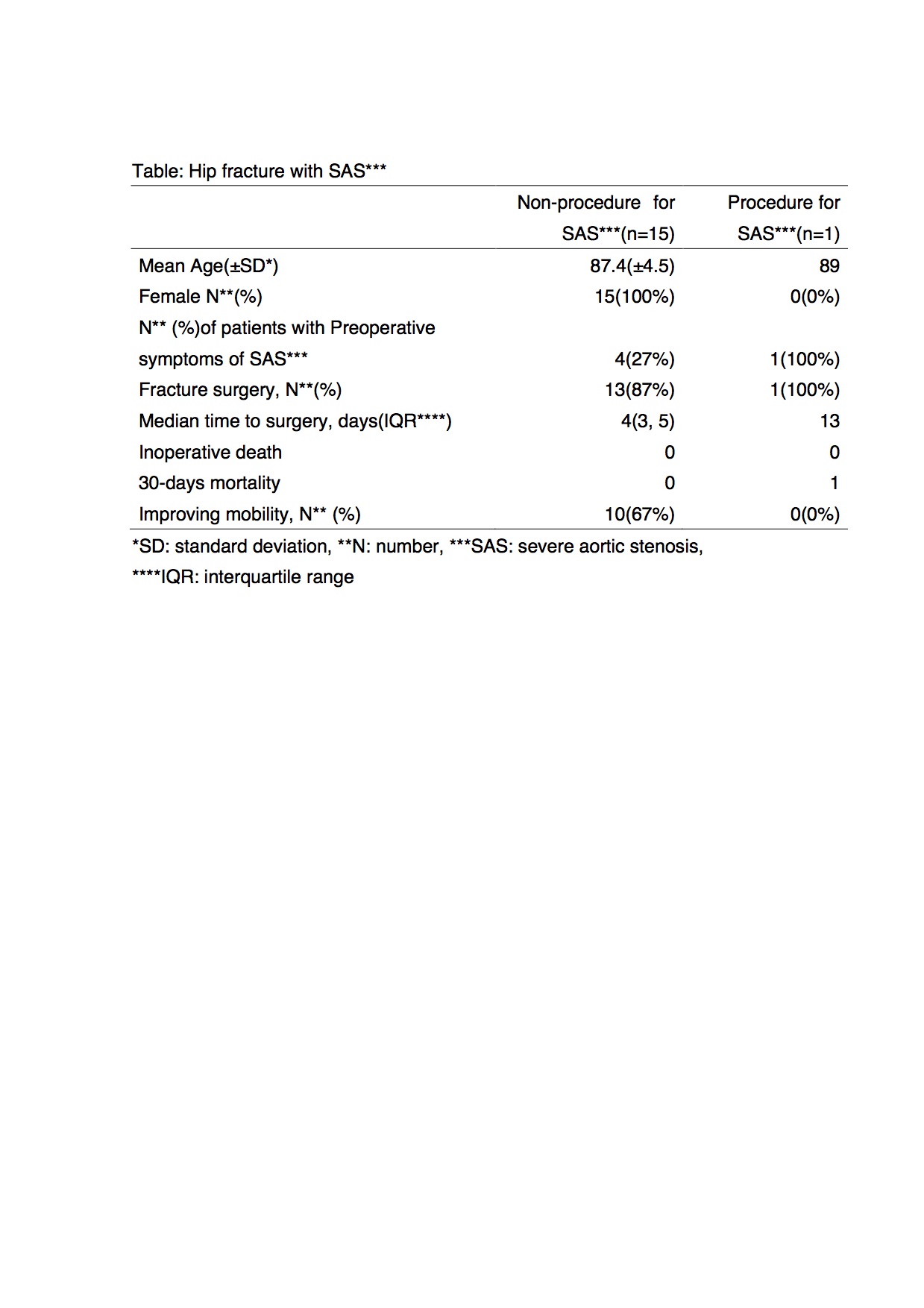