A 64‐year‐old female with Hirschsprung disease was admitted to our hospital with fever and chills. She has history of multiple bowel surgeries and ileostomy with short bowel syndrome requiring TPN through a Hickman catheter. Her blood cultures grew Candida albicans, and she was diagnosed with catheter‐related fungemia. Hickman catheter was removed, and micafungin was started. As ophthalmic examination showed punctate choroidal lesions concerning for fungal choroiditis, micafungin was switched to fluconazole for better eye penetration. A thorough workup for bacterial endocarditis was negative. On day 4 of fluconazole therapy, the patient complained of nausea and received a single dose 5 mg of ondansetron IV. Fifteen minutes after receiving ondansetron, she suffered cardiac arrest requiring CPR. Recurrent episodes of torsades de pointes (TdP) were recorded during resuscitation. Postarrest ECG demonstrated a corrected QT interval (QTc) of 607 ms in contrast to a normal ECG 5 months prior to admission. Thyroid hormone and serum electrolytes including serum potassium, magnesium, and free calcium were normal. A transthoracic echocardiogram revealed no abnormalities. Fluconazole and Ondansetron were suspected to be the etiology and were stopped. The patients QT interval normalized (QTc, 430 ms) after 7 days. 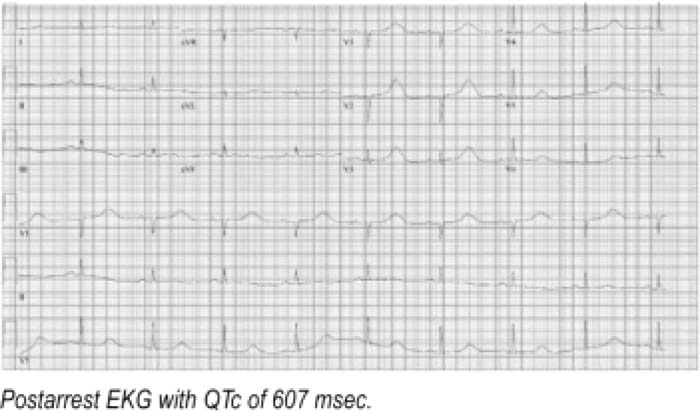 Between 1% and 5% of drug‐induced QT prolongation cases will progress to TdP. The major classes of drugs that prolong QT include antiarrythmics, antimicrobials, and psychotropic medications, as additional medications continue to be identified. Generally, high concentrations, decreased clearance, rapid infusion, and coadministration of CYP3A4 inhibiting drugs lead to this grave side effect. Fluconazole, like other groups of azoles, inhibit the human ether‐a‐go‐go‐related gene (HERG) potassium channel, which in turn inhibits the delayed rectifier potassium channel and prolongs the QTc interval. Few case reports have described fluconazole causing TdP in high and low concentrations by prolonging QTc interval, more so when given with other QT prolonging drugs. Ondansetron prolongs QT by blocking the rapid‐delayed rectifier potassium channel. Several studies have shown extremely unlikely potential of ondansetron (and other 5‐HT3 antagonists) to cause dysrhythmias like TdP, for the QTc interval changes are small, not exceeding 15 ms. To our knowledge, this is the first case of OTc prolongation leading tc TdP in a man who received both fluconazole and ondansetron.

Fluconazole and ondanselron are commonly used drugs among hospitalized patients. Physicians should be aware that fluconazole monotherapy, even at low dose, can cause QT prolongation and can lead to TdP if given with other QT‐prolonging drugs. Serial EKGs may be considered while administering such agents.