A 53-year-old woman, with 30 pack-year smoking history, presented to the hospital with subacute posterior cephalgia associated with nausea, vomiting and photophobia. Review of systems was positive for an unintentional 15 pound weight loss and non-productive cough. She denied fever, recent travel or pet exposure.  She was not on any medications. Vital signs were stable and physical examination did not reveal any focal neurological deficits. Complete blood count and comprehensive metabolic panel were within normal limits. A computed tomography (CT) scan of brain without contrast demonstrated a 1.2 cm hyperdense nodule in the right occipital lobe. Magnetic resonance imaging (MRI) of brain showed multiple bilateral occipital ring enhancing lesions/masses with surrounding vasogenic edema concerning for intracranial metastasis. A CT Chest was remarkable for multilobar pulmonary infiltrates with scarring, volume loss, and a nodular parenchymal opacity in the right upper lobe. This was suspicious for a primary lung malignancy. Patient underwent a bronchoscopy which was non-diagnostic. Whole body positron emission tomography (PET) scan revealed abnormal uptake in right lung apex concerning for malignancy. While awaiting a lung biopsy, patient received intravenous steroids for worsening headache and nausea, concerning for elevated intracranial pressure. Brain radiotherapy was planned for possible metastatic disease. Right upper lung mass biopsy was done for cytological and microbiological evaluation. Pathology was negative for malignancy but Grocott’s methenamine silver stain (GMS) showed cells consistent with blastomyces. A diagnosis of disseminated blastomycosis with central nervous system involvement was confirmed with positive blastomyces antigen from her spinal fluid. Steroids were discontinued and the patient was treated with amphotericin B. Her symptoms improved and she was discharged home on a prolonged course of oral voriconazole.

Blastomycosis, endemic in the Mississippi and Ohio River Valleys and southeastern United States, is an uncommon dimorphic fungus that presents with respiratory symptoms including cough, chest pain, and hemoptysis.  Radiographically, it mimics pneumonia with findings of alveolar and/or fibronodular infiltrates. It may also have the appearance of a mass lesion. While pulmonary manifestations are the most common (occurring in 90% of patients), central nervous system (CNS) involvement is rare, seen in only 1-5% of cases, typically in the immunosuppressed population. CNS Blastomycosis can present with meningeal signs as well as focal neurologic signs (which may suggest intra-parenchymal abscess). Diagnosis is established with positive sputum or bronchoalveolar lavage cultures or the identification of the fungus on GMS stain. In cases of purported isolated CNS involvement, CSF antigen, qualitative as well as quantitative assays, confirm diagnosis.  Treatment for CNS Blastomycosis is with Amphotericin B for the first 4-6 weeks, followed by a prolonged course of oral azoles.

CNS Blastomycosis is rare in immunocompetent patients and when associated with lung involvement can mimic other diseases like lung malignancy. A high degree of suspicion is required for diagnosis in patients living in endemic areas. An aggressive approach is warranted for early diagnosis and prompt treatment. 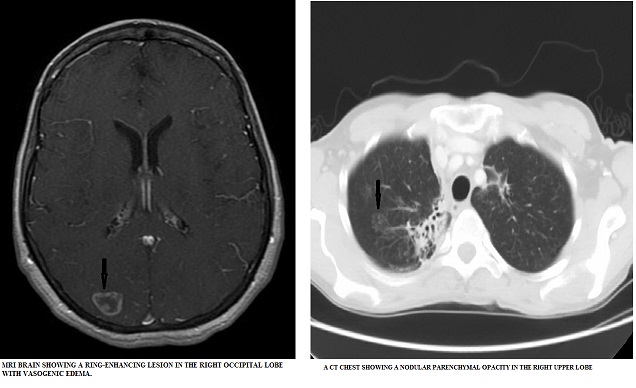