A 64‐year‐old female patient with a significant medical history of ovarian cancer in remission treated with surgery 20 years ago presented with a 5‐day history of shortness of breath and right‐sided chest pain. She referred that these symptoms were progressively getting worse, describing orthopnea and frequent urination. She also described that her urine became foamy 1 week before the admission. Further questioning confirmed that patient was stung by a bee 4 weeks prior to her admission. One week after that, the right arm started to be swollen and tender. She also noticed 2 weeks of lower‐extremity edema, neck edema, and moderate swelling of the right arm and eyelids (Fig. 1). At admission the patient was found to be on anasarca. Laboratory showed elevated BNP and low albumin and high cholesterol. Chest x‐rays showed pulmonary edema. A CT angiogram did not show any pulmonary embolism but revealed extensive SVC thrombosis extending from the cephalic vein into the subclavian vein and jugular vein and to the right atrium as well (Fig. 2). She was started on diuresis and anticoagulation. An albumin:creatinine ratio showed proteinuria in nephrotic range. Interventional radiology administered TPA with partial resolution of the clot. Anticoagulation was continued. Hematology attributed SVC thrombus to the prothrombotic state due to the nephrotic syndrome (acute onset < 4 weeks). Thrombophilia workup was done and came back negative. Patient improved clinically with IV diuresis. Patient was discharged home on warfarin and Lasix. Outpatient follow‐up showed resolution of the nephrotic syndrome. Warfarin was continued because of SVC thrombus. Kidney biopsy was planned but delayed because of warfarin therapy. Finally it was not done due to resolution of the nephrotic syndrome.

Bee stings usually cause minor local allergic reactions. But systemic complications such as glomerulonephritis, interstitial nephritis, acute renal failure, myocarditis, centrilobular necrosis of liver, Guillain–Barré syndrome, and vasculitis can be seen. Nephrotic syndrome (NS) induced by bee sting is described in the literature. NS is rare, and there is little known information about histological findings, long‐term follow‐up, incidence, and response to therapy. Histopathology demonstrated minimal change disease, mesangial proliferative glomerulonephritis, severe glomerular hyalinization, and a mixed pattern of mesangioproliferative glomerulonephritis and early membranous nephropathy. Concerning the initial treatment and response, the data are very controversial. Steroids are the main therapeutic option although spontaneous remission is occasionally seen in nephrotic patients due to insect sting as in our case. Some of them will relapse.

This patient did not have any risk factors for a sudden onset of nephrotic syndrome other than bee sting. The spontaneous remission supports the diagnosis of bee sting–induced nephrotic syndrome, which correlates with the few cases reported in the literature. 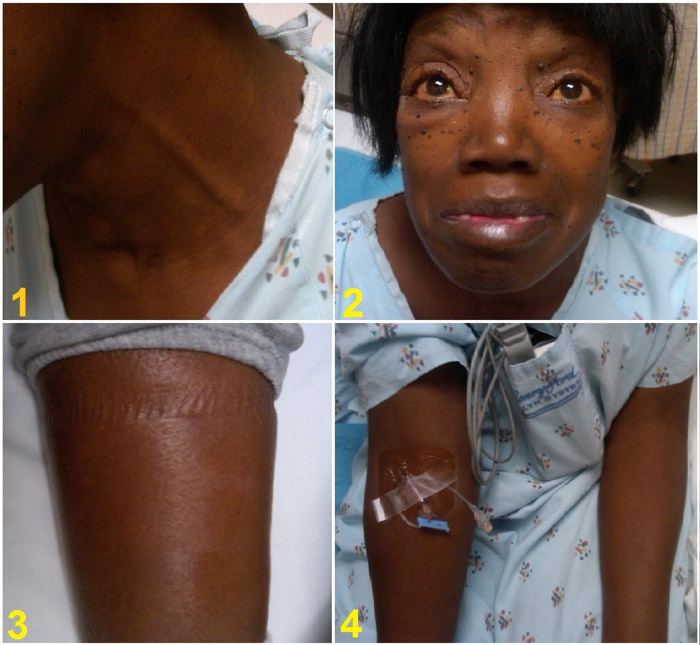 Nephrotic syndrome and SVC syndrome: (1) Impressive jugular venous distention, (2) eyelid swelling, (3) lower‐extremity pitting edema, and (4) edema of the right upper extremity compared with the left one. Photos were taken with the consent of the patient. 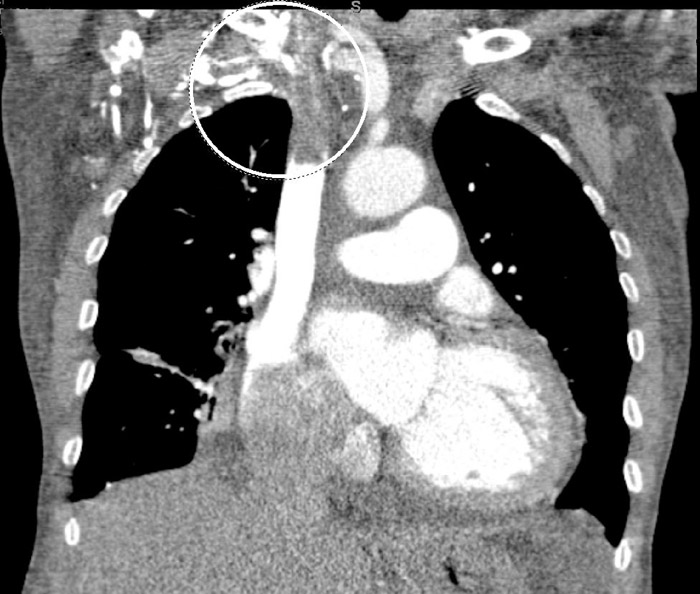 Superior vena cava (SVC) thrombus, extending from the cephalic vein to subclavian vein and then to the jugular vein and the main SVC vein into the right atrium. Thought to be related to the bee sting on the right arm and predisposed by the prothrombotic state generated by the bee sting–induced nephrotic syndrome. Manifested clinically as SVC syndrome, was treated with anticoagulation and TPA.