Background: Transitions from hospitals to the ambulatory setting are high risk periods for patients. Many interventions have been tried, with varying degrees of success, and often the problem has been with implementation rather than theoretical efficacy of the intervention.Methods: We developed, implemented, refined, and evaluated a multi-faceted, multi-disciplinary transitions intervention across two hospitals and 18 primary care practices within a Pioneer Accountable Care Organization.  We then conducted focus groups of 2-8 clinicians that were part of or affected by the intervention: inpatient and outpatient physicians, nurses, pharmacists, and care coordinators.  We used a semi-structured qualitative interview guide to standardize data collection.  Preliminary themes, including barriers to implementation, were identified a priori using the Systems Engineering Initiative for Patient Safety model of work-system design, then iteratively refined.  Each focus group session, approximately 60 minutes each, was audio-recorded, transcribed, and then uploaded into NVivo 11 (QSR, Melbourne, 2012).  Two coders independently coded all transcripts then met to resolve discrepancies.

Results: A total of 8 focus group interviews were conducted, involving 21 participants.  Several barriers to implementation of the intervention were identified (Table).  Regarding those related to the inherent nature of the intervention, barriers included complexity of certain tasks, such as post-discharge phone calls, relative to the personnel carrying them out, as well as the number of personnel involved.  Logistical barriers included different modes of communication between inpatient and outpatient nurses, having enough advanced warning of a pending discharge to perform medication counseling, and lack of staffing to conduct the intervention on weekends.  Handoffs between roles and locations was a barrier, with inadequate information systems to keep everyone on the same page and communicate important issues to be followed up.   Several providers linked the lack of sufficient staffing for this intervention to the institution’s lack of commitment to improving transitions of care.  The barriers most often cited by providers were lack of communication and lack of time availability/”bandwidth,” followed by lack of institutional commitment, difficult patient population, competing priorities, variable staffing, and logistics. 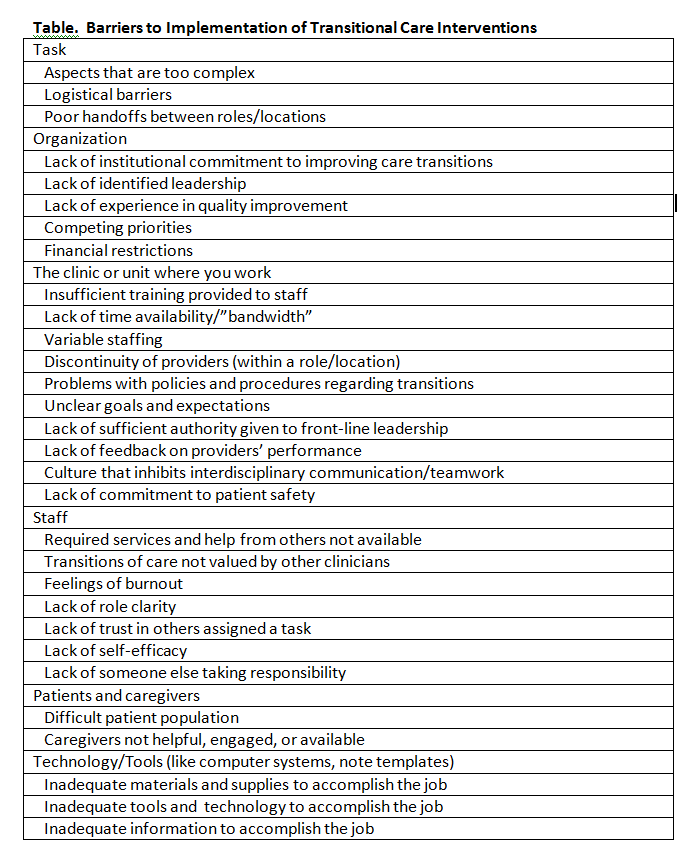