Background: Medical error is now the third leading cause of death in the United States. Approximately 4% of hospitalized patients experience an adverse event with 20% of these adverse events being medication-related, three-fourths of which are prescribing and administration errors. Vancomycin has been reported to account for one-fourth of the medication errors. Prescribing vancomycin is complex and requires interdisciplinary clinical team coordination (providers, nursing, pharmacy and laboratory), in addition, the dose and frequency can vary based on patient characteristics, including age, weight and renal function. To minimize the risk of adverse effects, therapeutic monitoring is indicated. The nature of vancomycin dosing makes it an ideal target for a rules-based clinical informatics intervention.

Purpose: To describe the current and future impact of intelligent process automation and point of care decision support to improve vancomycin use.

Description: A multidisciplinary team applied Failure Modes and Effects Analysis and Quality Function Deployment methodologies to identify failures of appropriate vancomycin use. Monitoring of serum vancomycin levels was pinpointed as the most frequently-missed, highest-risk step.To overcome this practitioner recall dependence, the team designed an EHR-based Intelligent process automation rule that, after the third dose of vancomycin, automatically ordered a vancomycin trough level scheduled to be drawn 30 minutes before the ordered time of the fourth dose. In addition, nursing staff were reminded to draw a trough level if they interacted with a patient’s bar code to administer a fourth dose prior to the trough level having been charted as drawn. The impact of this intervention was studied as an interrupted time series. Chi-square tests, t tests, and the Wilcoxon-Mann-Whitney test were used to compare differences between groups.
Data from encounters from October 2016 to December 2016 were defined as the pre-intervention group, and data from encounters from February 2017 to April 2017 were defined as the post-intervention group. The percentage of encounters with a completed trough order increased from 58.6% to 75.8% after the intervention (p < 0.001, Table 1). The percentage of encounters with no trough order decreased from 28.6% to 12.8% after the intervention (p < 0.001, Table 1). Of all trough orders completed before the fourth dose, the percentage completed between the third and fourth dose increased from 58.6% pre-intervention to 70.7% after the intervention (Table 2, p < 0.0001). In this study, approximately 60% of patients were underdosed and 12-14% were overdosed. If this data were extrapolated across the patient population of this medical center for a year, roughly 3540 patients would receive vancomycin of whom 2234 would be underdosed, and 460 would be overdosed. The automated process would identify an additional 384 patients who were underdosed each year and an additional 79 patient who were overdosed each year.

Conclusions: An automated process for ordering vancomycin trough levels increased by 30% the number of troughs collected. Because these trough levels indicated that the majority of patients were not on the optimal dose, and misdosing of vancomycin has significant risk for both treatment failure and toxicity, this study demonstrates the value and imperative of automating routine, multi-step clinical processes. 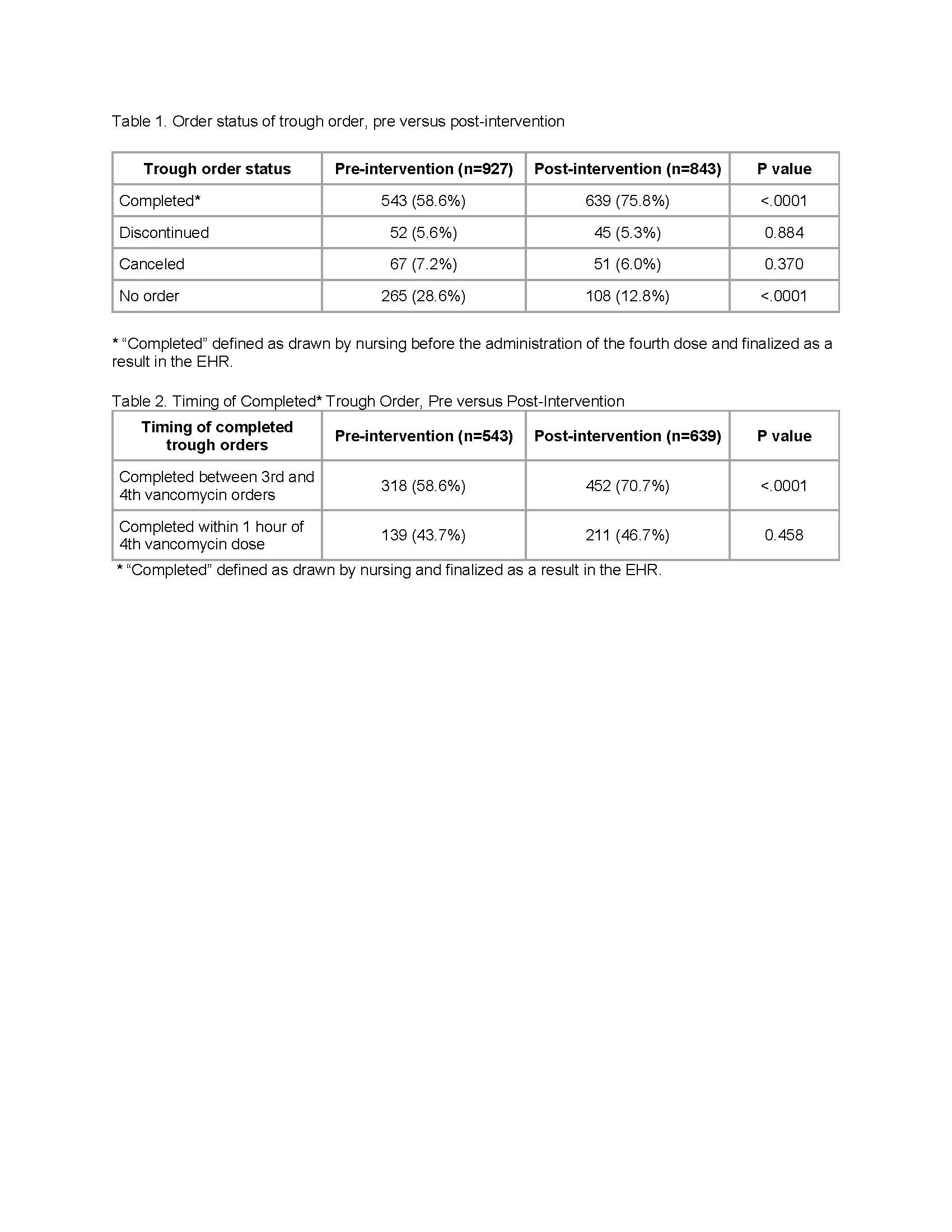