Background: Hepatic encephalopathy (HE) is a common complication in patients with end stage liver disease. Variability in presentation can be a source of clinical uncertainty for medical providers. Ammonia levels have historically been used to aid in the diagnosis of HE despite low positive and negative predictive values. Our primary objective was to determine the perception of ammonia testing in our institution, comparing different ordering provider groups. Our second objective was to delineate specific clinical variables that make practitioners more or less likely to check ammonia levels in confused patients.

Methods: We designed a 17-question survey that was distributed via RedCap© to the divisions of hospital medicine, general internal medicine, gastroenterology, and department of emergency medicine at the University of Kentucky. There were 7 multiple choice questions, assessing propensity to check an ammonia level based on different clinical presentations. Responses on a Likert scale ranged from “never” to “100% of the time.” The final 8 questions were clinical vignettes that respondents could answer “yes” or “no” to checking an ammonia level. Respondents were given three weeks to complete the survey, with reminders sent weekly. Survey responses were anonymous.

Results: 140 providers responded for a response rate of 47.3%. While most survey participants responded they “never” or “<25% of the time” ordered an ammonia level when the diagnosis was clear, the propensity to check an ammonia level increased when the diagnosis was less apparent. Specific factors that correlated with more frequent ammonia testing with statistical significance included a history of HE (11% vs 24%, P=0.0023), absence of asterixis (54% vs 43%, P=0.011), absence of ascites (64% vs 49%, P=0.006), and inability to assess for asterixis due to severely altered mental status (73% vs 49%, p<0.001). We also found proclivity for ammonia testing varied between departments, namely internal medicine vs emergency medicine. According to a Kruskal-Wallis H test, emergency medicine providers were significantly more likely to order an ammonia test in cirrhotic patients who present to the hospital both with and without confusion. Emergency medicine providers were more likely to report that ammonia testing impacts their patient management.

Conclusions: This single institution survey shows that a significant portion of providers across specialties consider including an ammonia level in their work-up for HE despite ample evidence supporting the poor utility of ammonia testing. Testing seems to be more frequent when the diagnostic uncertainty is higher, suggesting providers are using the ammonia level as a screening test despite poor sensitivity. We suspect that our institution is not alone in this practice. Results of this survey suggests that widespread educational campaigns regarding the poor utility of ammonia testing in HE are necessary for all specialties who regularly care for patients presenting with confusion. 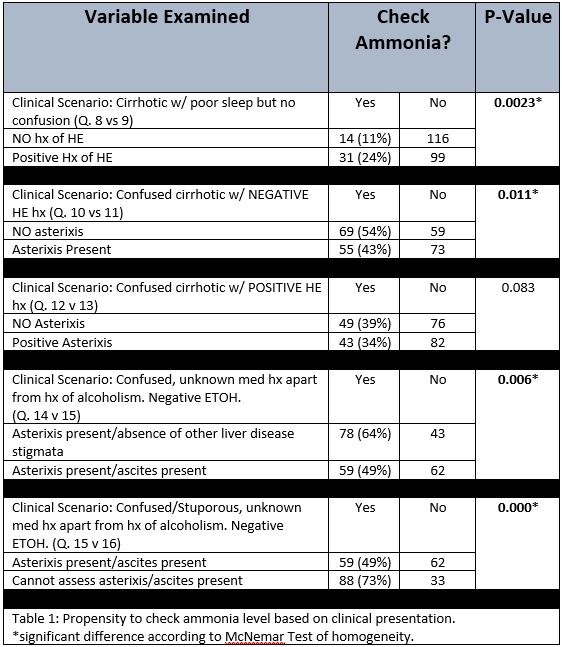