The study was conducted in the observation unit of an 805‐bed urban hospital where patients are referred from multiple urban and suburban emergency departments. Patients were included if they presented to the observation unit with the chief complaint of chest pain. Intake information was collected in a prospective manner and was then used to apply the NACPR (Table 1). The chest pain component of the rule was standardized using the American Heart Association’s definition of typical angina. The primary end‐point for the study was the combined outcome of death from all causes, acute myocardial infarction, and coronary revascularization at 30 days following observation visit. Follow‐up information was obtained by a phone call or chart review.

A total of 418 patients were initially enrolled. Follow‐up was obtained for 298 (71%), with an average age of 58.9 years and 60.8% were female. Phone follow‐up was completed for 217 (72.6%) of the total followed‐up. At least one component of the NACPR was present in 229 (76.8%) of those with complete follow‐up. The primary end‐point occurred in 9 patients (3%), including 1 death, 3 with nonfatal acute myocardial infarction and 5 with significant disease requiring coronary revascularization. All 9 events occurred in those who had at least one component of the NACPR, thus resulting in a sensitivity of 100% (95%CI, 66 to 100) and a negative predictive value of 100% (95%CI, 95 to 100) for predicting the primary end‐point. Complete test characteristics of the NACPR are summarized in Table 2.

The NACPR appears useful in identifying chest pain patients who are at very low risk of acute coronary syndrome and who may benefit from early discharge from the observation unit. 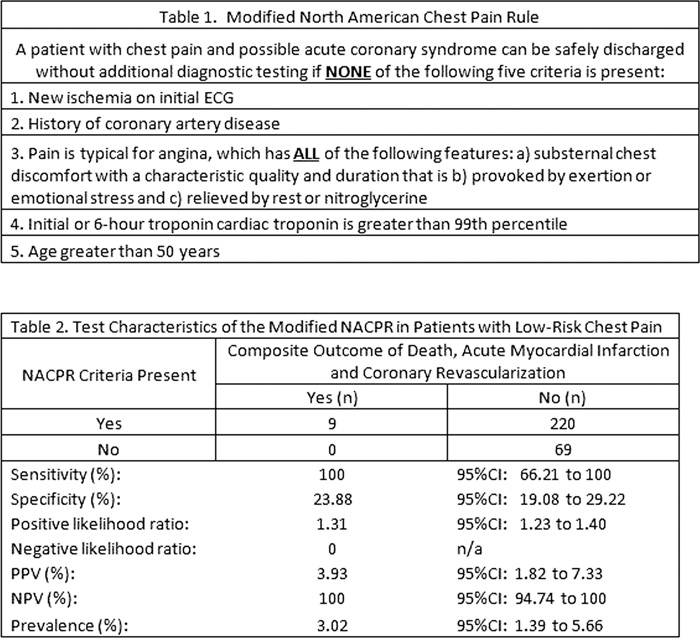