A 74‐year‐old woman with a medical history of chronic obstructive pulmonary disease (COPD), hypertension, and paroxysmal atrial fibrillation presented to the preoperative clinic for optimization prior to her right hip replacement surgery. She had excellent functional capacity; however, this was limited lately because of increased hip pain. She denied any active cardiac symptoms (i.e., chest pain, shortness of breath, or orthopnea). Her medications include; aspirin, metoprolol and albuterol inhaler as needed. Her vital signs were within normal. A physical exam yielded no remarkable findings except for irregular heart rhythm. Blood work including; complete blood count and complete metabolic profile were unremarkable. Because of her irregular heart rhythm an electrocardiogram was done (Fig. 1). The electrocardiogram shows sinus rhythm, with premature supraventricular complexes (green arrow). Following the seventh beat (red arrow), the cycle length (A) is longer than the subsequent cycle (B) giving a long‐short sequence that ends in an aberrantly conducted beat that has terminal broadening and a right‐bundle‐branch‐type pattern rSR' (blue arrow). This is a typical Ashman's phenomenon. The next beat in sequence is returned to the baseline QRS configuration.

Ashman phenomenon is an intraventricular conduction abnormality caused by a change in the heart rate, especially in patients with atrial dysrhythmias and atrial fibrillation. It allowed clinicians to distinguish aberrant beats from ventricular ectopy. Ashman beat is typically seen when a relatively long cycle is followed by a relatively short cycle. The Ashman phenomenon is restricted to the His‐Purkinje system and the pathophysiology of this phenomenon depends the heart rate, the higher the heart rate is, the longer the refractory period, vas versa. The QRS complex that ends the long pause will be conducted normally; however, if the next QRS complex occurs after a short coupling interval, it may be conducted aberrantly since one of the bundles is still refractory as a result of a lengthening of the refractory period. The refractory period of the right bundle‐branch is longer than the left one and it will still be in the refractory period when supraventricular impulse reaches the His‐Purkinje system resulting in a complex with RBBB. In contrast, functional aberration is uncommon in the His bundle, the left posterior fascicle, or the main left bundle. Treatment should be directed at the underlying cardiac condition.

In case of atrial fibrillation, aberrant conduction with Ashman phenomenon is considered a benign rhythm with no further workup needed especially in perioperative settings. The management should be focused at rate control with beta‐blockers or calcium channel blockers. Our patient continued on her metoprolol preoperatively and underwent the hip surgery with no complications. 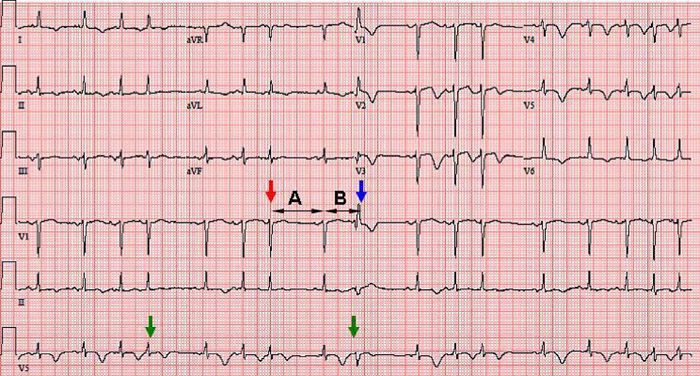