A 54-year-old Caucasian female with a history of obesity hypoventilation syndrome on 2L/min home oxygen therapy, breast cancer status post lumpectomy and radiation, and deep vein thrombosis on warfarin, presented to the emergency room with a chief complaint of dyspnea. She noted she was saturating between 70-80 percent on home pulse oximetry, prompting her to seek medical attention. Of note, she was seen at an outside hospital two weeks prior for chest pain. Workup at that time included echocardiogram revealing a mild pericardial effusion, and cardiac catheterization, which was negative for coronary artery disease, so she was discharged home. On arrival to our hospital, she denied symptoms of a viral prodrome, otitis media, or pneumonia. She was afebrile, with blood pressure 90/51 mmHg, pulse 122, and oxygen saturation of 86% on 3L/min oxygen.  Lab studies revealed INR of 7, leukocytosis to 14,700/mL, hemoglobin 9.7 g/dL from a baseline of 11 g/dL, and normal troponin and BNP levels. Chest x-ray showed cardiomegaly, and EKG showed sinus tachycardia with low voltage QRS complexes. Echocardiogram revealed a large pericardial effusion and findings suggestive of tamponade.

Patient underwent an emergent subxyphoid pericardiocentesis, with blood-tinged fluid seen on aspiration. A drain was placed and analysis of the pericardial fluid showed 6814 cu/mm WBCs with 86% neutrophils. She was started on intravenous vancomycin for treatment of purulent pericarditis, but cultures later grew Alloiococcus otitidis susceptible to amoxicillin, so her regimen was adjusted accordingly. Her symptoms improved and she had minimal drainage. Her drain was removed and she was discharged home to complete a four week course of antibiotic therapy. Follow-up echocardiogram four months later did not show evidence of recurrence.

Purulent pericarditis is usually caused by S. aureus and S. pneumoniae, but there have been many reported cases involving other organisms. In our patient, pericardial fluid cultures grew Alloiococcus otitidis, a slow-growing Gram-positive bacteria typically associated with otitis media. There have been no prior reports of Alloiococcus causing purulent pericarditis. The organism has a high prevalence in the external ear canals of healthy people, but is becoming a more commonly reported pathogen causing ear infections, and rare cases of endocarditis and endophthalmitis.

Our patient’s presentation was unusual, as she did not have a history of ear infections or symptoms suggestive of other bacterial infection. In evaluating for other causes, chest x-ray did not show consolidation and she did not have recent intrathoracic procedures that could otherwise explain her current illness.

The diagnosis of purulent pericarditis is typically established by obtaining pericardial fluid by pericardiocentesis. Classically, fluid protein concentration is high, glucose levels are less than 35 mg/dL, and leukocyte counts are at 6000 to 240,000/microL. Treatment involves pericardial drainage and antibiotic therapy. Antibiotics are started empirically, and then tailored to the specific isolated pathogen, for a total of 2 to 4 weeks of therapy.

This is a rare case of purulent pericardial effusion leading to tamponade, caused by Alloiococcus otitidis, an organism typically seen as normal flora in the ear and upper respiratory tract. Our patient was successfully treated with subxyphoid pericardiocentesis, temporary drain placement, and appropriate antibiotic therapy. 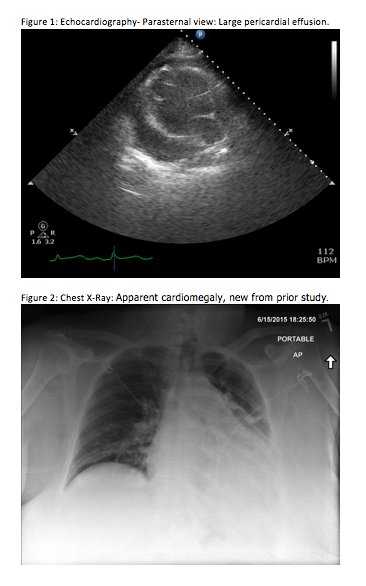