A 55‐year‐old woman with cirrhosis due to hepatitis C and hepatocellular carcinoma presented with 6 months of progressive cognitive impairment and gait imbalance despite treatment for hepatic encephalopathy. On exam, she was easily distracted, inconsistently recognized family members, had short term memory impairment, bilateral hand resting tremors, cogwheeling in wrists, and slow, wide‐based gait. There were no focal motor deficits. Routine blood tests were unremarkable except for INR 1.5, total bilirubin 3.2, AST 100, ALT 61. MRI brain showed T1 hyperintensity in the globus pallidus. On day 20, she underwent liver transplantation. However, she remained oriented to person only and 5 days later delirium set in with auditory and visual hallucinations. Thirteen days after surgery she developed respiratory failure due to pneumonia follow by multiorgan failure requiring dialysis. She died on day 59 after transplantation. Manganese levels, first measured 8 days after transplant were normal (1.3), and were increased to 2.7 on day 43 after her transplant after she started to decline clinically. MRI brain done on postop day 13 was unchanged compared to MRI pretransplant.

Acquired hepatocerebral degeneration (AHCD) is a unique debilitating chronic brain disorder reported in patients with liver disease and longstanding porto‐systemic shunting. It remains underdiagnosed because the clinical picture has not been well defined. The pathogenesis has been attributed to manganese deposition in the basal ganglia. Clinical presentation is heterogeneous and includes extrapyramidal symptoms, balance and gait disturbances, and cognitive impairment. The diagnosis is made based on clinical manifestations in patients with liver failure and hyperintensities in T1‐weighted sequences primarily in the pallidum who do not respond to treatment for hepatic encephalopathy. Management is challenging, but experience shows that AHCD may improve remarkably within months following liver transplantation. However, some studies show no change in the symptoms of AHCD, possibly because patients may not have survived long enough to show improvement.

It is important to differentiate AHCD from hepatic encephalopathy, and chronic degenerative processes such as Parkinson's or dementia, as AHCD is potentially reversible by liver transplantation. In clinical practice, the decision to proceed to surgery is complex; severe neurologic deficits may delay transplant, but patients with AHCD should be considered transplant candidates based on studies showing positive results. 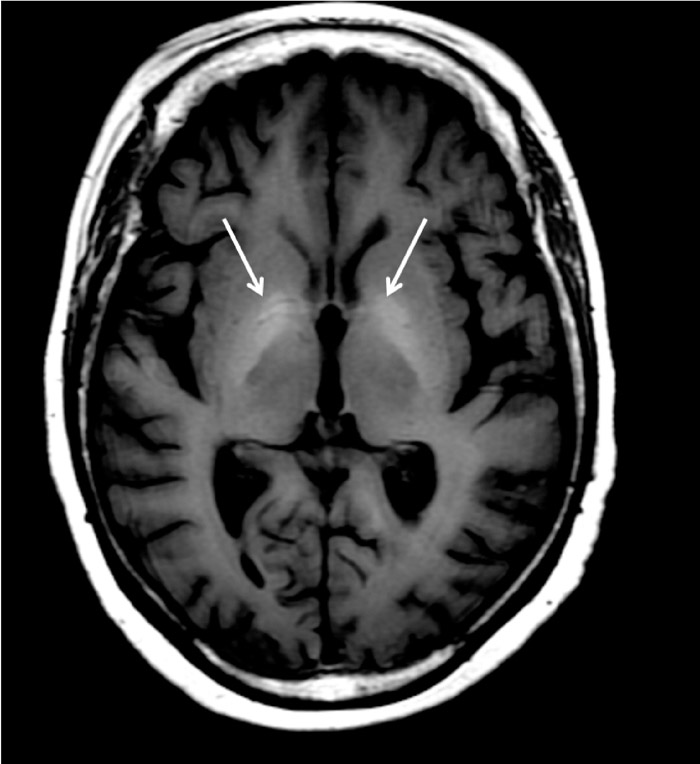